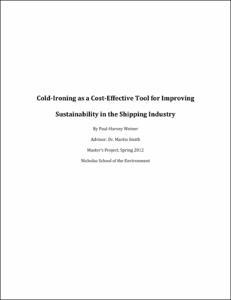 View / Download
873.8 Kb
Date
Author
Weiner, Paul-Harvey
Advisor
Smith, Martin D.
Repository Usage Stats
428
views
3,881
downloads
Abstract
The marine transportation sector stands as a major component of the global economy, delivering goods from major producing markets in Asia and the Pacific region to major consumer markets in Europe and North America. The United States Department of Transportation’s Maritime Administration recorded over a billion tons of foreign trade through U.S. ports in 2009. Given the economic importance of this sector, its inclusion in future environmental remediation regimes is key. But any improvement in the environmental performance of shipping must take into account the fact that requirements that make shipping more expensive relative to other forms of transport would likely result in an overall negative environmental outcome. This master’s project investigates whether or not cold-ironing, a method by which ships use shore-side electric power rather than auxiliary engines while in port, can improve environmental performance in a cost-effective manner. The analysis involved constructing a model that compared operational costs under business-as-usual conditions with operational costs following the deployment of cold-ironing. A deterministic analysis was first undertaken to explore how historic movements in fuel and electricity prices affected the magnitude of savings. This was followed by a stochastic analysis using a monte carlo simulation to explore how variations in fuel prices, electricity prices, and ship operating characteristics affected the expected level of savings across an entire fleet. The results demonstrated that cold-ironing could deliver substantial savings, dependent on the relative magnitudes of fuel and electricity prices. Overall, smaller ships did not experience savings as they could not recoup the costs of the cold-ironing retrofit. A sensitivity analysis showed that changing operational characteristics, such as the number of engines in operation on a ship, had a large impact on savings. Governments and port authorities need to look where their interests in environmental improvement align with those of ship operators that can benefit economically from the use of cold-ironing to aid in the deployment of the shore-side infrastructure necessary to expand the use of this tool.
Type
Master's project
Department
Nicholas School of the Environment and Earth Sciences
Subject
shipping
cold-ironing
marpol
marine
Permalink
https://hdl.handle.net/10161/5175
Citation
Weiner, Paul-Harvey (2012). Cold-Ironing as a Cost-Effective Tool for Improving Sustainability in the Shipping Industry. Master's project, Duke University. Retrieved from https://hdl.handle.net/10161/5175.
Collections
More Info
Show full item record