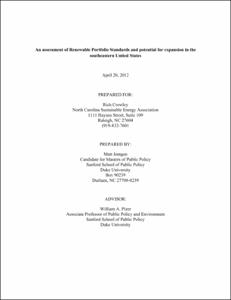 View / Download
1.4 Mb
Date
Author
Jentgen, Matthew
Advisor
Pizer, William Aaron
Repository Usage Stats
1,040
views
1,020
downloads
Abstract
We currently face a tremendous challenge to transition away from carbon-intensive fossil fuels as our primary energy source to more sustainable and cleaner options, including renewable energy. A Renewable Portfolio Standard (RPS), which requires a minimum share of renewable power generation, is one policy mechanism that has been adopted by many states in the US to stimulate generation and investment. The recent passage of the North Carolina Renewable Energy and Energy Efficiency Standard (REPS) represents the first example of such a program in the South. Attempting to learn from this experience, this paper evaluates and offers lessons for other southern states who might adopt a renewable portfolio standard. This work responds to interest by the North Carolina Sustainable Energy Association (NCSEA) on the potential for other southern states to adopt a renewable portfolio standard. Combining historical experience with RPSs, recent experience with the NC REPS, and interviews with policymakers and energy sector stakeholders in neighboring South Carolina, I have concluded that while there are barriers to RPS adoption, there are also tremendous opportunities. There are three elements of a renewable portfolio standard that can be attractive to South Carolina policymakers: 1. Job growth potential: A renewable industry in North Carolina has been bolstered by the state’s renewable standard. A similar industry can be built in South Carolina. 2. A state mandate is better than a federal mandate: South Carolina’s ideological makeup is more inclined to state regulations based on a state’s needs. Other traditionally conservative states have enacted renewable portfolio standards: Utah, Arizona, South Dakota, and North Dakota. 3. Benefits to rural electricity cooperatives: Rural electricity cooperative members in South Carolina have historically been skilled technicians with experience installing appliances and equipment. These cooperatives could benefit from a new industry that installed renewable technologies such as solar photovoltaic and solar thermal systems. While the elements discussed above can drive RPS adoption in South Carolina, the policy design of North Carolina’s REPS can serve as a template to create the next renewable standard in the South. It is important to balance the renewable energy goals with the realities of regulated energy markets in the region. Based upon insights from North Carolina’s experience and general research of renewable energy policies, I recommend four policy mechanisms that will make the next renewable standard sustainable and effective: 1. Make the renewable standard mandatory. Twenty-nine states have enacted mandatory renewable portfolio standards, while four other states have enacted voluntary renewable targets. A voluntary standard may appear to be more politically palatable, but it lacks the certainty utilities covet and the mandate utilities need to procure anything other than “least-cost” generation. 2. Include an alternative compliance payment (ACP) mechanism to clarify noncompliance. An ACP has been successfully implemented in most RPS states. Such a mechanism helps to establish an acceptable price for renewable generation in the state. If funds are generated through an ACP, they can be distributed to potentially viable energy technology projects. 3. Design requirements according to various state resources. The annual renewable generation requirements have been met by most RPS states. The benefit of these state standards is that they can be tailored to local resources. Set-asides, such as those for hog and poultry in North Carolina, can be used to address state-specific resources, expertise, and industry. 4. Allow energy efficiency programs and out-of-state renewable credits to meet some portion of renewable standard. The energy efficiency provision gives electricity retailers greater flexibility to meet the standard and gives greater control of assets. The out-of-state renewable credits enable the purchase of low-cost renewable generation that still meets broader emissions reduction goals. However, these advantages need to be balanced against the local economic interest of keeping resources in state and focused on renewable energy. Conclusion A renewable portfolio standard is a proven policy tool that can help to guide our transition away from fossil fuels. The lessons learned from other RPS programs, from North Carolina’s recent and pioneering effort, and from on-the-ground, local stakeholders, can and should be used to help other southern states to adopt an RPS. This will in turn help them to meet their energy needs, to diversify their energy sources, and to mitigate climate change.
Type
Master's project
Department
The Sanford School of Public Policy
Subject
Renewable Portfolio Standard
North Carolina Renewable Energy and Energy Efficiency Standard
South Carolina
Permalink
https://hdl.handle.net/10161/5188
Citation
Jentgen, Matthew (2012). An Assessment of Renewable Portfolio Standards and Potential for Expansion in the Southeastern United States. Master's project, Duke University. Retrieved from https://hdl.handle.net/10161/5188.
Collections
More Info
Show full item record