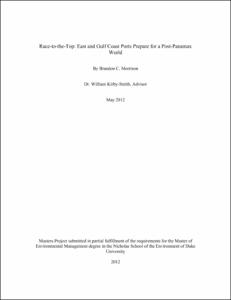 View / Download
496.8 Kb
Date
Author
Morrison, Brandon
Advisor
Kirby-Smith, William
Repository Usage Stats
462
views
3,828
downloads
Abstract
Kurt Nagle, president of the American Association of Port Authorities, and David Matsuda, maritime administrator for the United States Department of Transportation, have both labeled the Panama Canal expansion project as a "game-changer" for seaports in the United States. The true effects of the canal’s expansion will not be definitively known for years to come. Yet such uncertainty has not reduced the anticipation of economic benefits to a number of East and Gulf Coast ports. The prospect for increased cargo being shipped to East and Gulf Coast ports, and consequently away from West Coast ports, has generated an assortment of activity at numerous ports, as each prepares for an increase in both cargo volume and the size of incoming vessels.
Type
Master's project
Department
Nicholas School of the Environment and Earth Sciences
Subject
Panama Canal
East and Gulf Coast Ports
Permalink
https://hdl.handle.net/10161/5201
Citation
Morrison, Brandon (2012). Race-to-the-Top: East and Gulf Coast Ports Prepare for a Post-Panamax World. Master's project, Duke University. Retrieved from https://hdl.handle.net/10161/5201.
Collections
More Info
Show full item record