AN ANALYSIS OF THE SO2 CAP AND TRADE MARKETABLE PERMIT SCHEME: ARE HOT SPOTS A CONCERN? 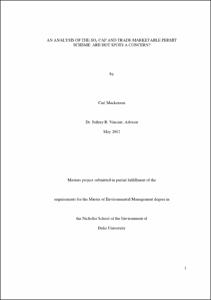 View / Download
294.2 Kb
Date
Author
Mackensen, Carl
Advisor
Vincent, Jeffrey
Repository Usage Stats
235
views
370
downloads
Abstract
My project determines if the sulfur dioxide cap and trade program causes hotspots within states and counties. SO2 is a regional pollutant, but no geographic or temporal restrictions were specified in the program. My data are from EPA, and include two datasets; state-level measurements on SO2 emissions and other explanatory variables, and county-level measurements in the same form. I ran regression to find which/how many states and counties SO2 levels increased. Stage 1 of the program (1995 to 1999) and stage 2 of the program (2000 to 2010) were compared to the base period of stage 0 (1980, 1985, 1990). I found that at the state-level, most experienced a significant drop in SO2 emissions during stage 1. Other states experienced significant increases in emissions at stage 1. No states experienced positive SO2 emissions during stage 2. At the county-level I found that some counties experienced an increase in SO2 emissions during stage 1. For the majority, emissions decreased. I also found that there were still a number of counties which experienced an increase in emissions during stage 2. This number was less than those positive-increase counties of stage 1. I also found that a number of states and counties experienced a net increase in pollution levels over the life of the program. Lastly, banking of permits in stage 1 for use in stage 2 did not occur at the state level. This did happen at the county level. Further analysis of the net and banking effects could serve as the basis of an additional paper. This, however, falls outside the realm of this analysis.
Type
Master's project
Department
Nicholas School of the Environment and Earth Sciences
Subject
cap and trade, SO2, hot spots
Permalink
https://hdl.handle.net/10161/5211
Citation
Mackensen, Carl (2012). AN ANALYSIS OF THE SO2 CAP AND TRADE MARKETABLE PERMIT SCHEME: ARE HOT SPOTS A CONCERN?. Master's project, Duke University. Retrieved from https://hdl.handle.net/10161/5211.
Collections
More Info
Show full item record