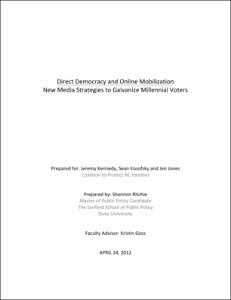 View / Download
967.6 Kb
Date
Author
Ritchie, Shannon
Advisor
Goss, Kristin Anne
Repository Usage Stats
1,282
views
992
downloads
Abstract
Policy Question What new media tactics should be employed to galvanize North Carolina Millennial voters in the run-up to the May 8, 2012 vote on Amendment One? Background and Policy Context The Coalition to Protect All NC Families was formed October 2011 in response to legislation passed by the NC General Assembly, Senate Bill 514, in support of a constitutional amendment that reads, “Marriage between one man and one woman is the only domestic legal union that shall be valid or recognized in this state.” Voters in NC will have the opportunity to vote “for” or “against” this amendment on May 8, 2012. The Coalition has been leading a campaign, on behalf of more than 100 member organizations, to educate voters on the harmful effects of this amendment and mobilize them to turnout and vote against it. Given the short timeline, this group is especially concerned with voter turnout. For this reason, they are particularly interested in Millennials as a target demographic for this research. As I later outline, this age group (18-31) is overwhelmingly in opposition to the proposed amendment, and is the generation most engaged online. The success of the campaign hinges on engaging this critical demographic. Data, Methods and Analysis My research strategy includes three steps: 1. Identify existing new media strategies used in previous ballot measure initiatives. 2. Research new media best practices, as they are employed in political campaigns. 3. Create a voter profile of Millennials in North Carolina. The Coalition leadership first requested that I look to other states to see what new media strategies have been implemented in similar social issue ballot measure initiatives. Then, I went a step further in deciding to research new media usage best practices, as it relates to political campaigns. I chose to exclusively focus on researching the Obama for America campaign, supplementing my findings with online research. Finally, I wanted to provide a complete and current profile of the North Carolina Millennial voter, so the Coalition could best understand this demographic – how were they politically engaged, where were they engaged (especially as it relates to online activity) and what strategies may be useful in activating them. A survey instrument would prove to be the best method of generating data for this profile. All three research methods served to inform my policy recommendations for the Coalition. Policy Recommendations New media tools prove to be a promising channel for the Coalition to Protect NC Families’ efforts to reach and galvanize Millennial voters. I outline two general new media tactics that the Coalition might benefit from incorporating into their overall new media communications strategy. These recommendations come towards the end of the campaign and only serve to reinforce existing new media efforts. 1. Increase visual content on existing SNS. a. With SNS posting, increase ratio of photos/videos to text, weighing even more heavily on photos. b. Create and share video content featuring people more recognizable and/or relatable to Millennial voters. c. Design infographics. 2. Continue to push early voting through SNS. With almost 40% of Millennial voters reporting that they aren’t currently registered to vote in their precinct, it’s critical that they engage in early voting or “one-stop” voting. North Carolina allows residents to register to vote and cast their ballot at the same time during the early voting period. In this election, the period is from April 19 to May 5, 2012.
Type
Master's project
Department
The Sanford School of Public Policy
Subject
millennials
new media
voter mobilization
ballot measure
social media
state referendum
Permalink
https://hdl.handle.net/10161/5217
Citation
Ritchie, Shannon (2012). Direct Democracy and Online Mobilization: New Media Strategies to Galvanize Millennial Voters. Master's project, Duke University. Retrieved from https://hdl.handle.net/10161/5217.
Collections
More Info
Show full item record