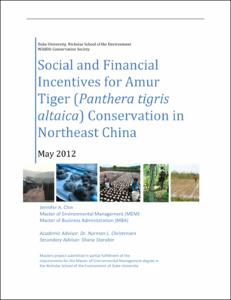 View / Download
2.6 Mb
Date
Author
Chin, Jennifer A.
Advisors
Christensen, Norman L.
Starobin, Shana
Repository Usage Stats
647
views
2,761
downloads
Abstract
China’s rate of economic development has skyrocketed in the last few years. Habitat loss due to development is one the greatest global threats to species. Already, an estimated 40% of China’s ecosystems have been destroyed, and 15-20% of its species are highly threatened. There are only a few last remaining areas of habitat in China for the Amur tiger. One of these is the Hunchun Nature Reserve in northeast China, though it is also home to several thousand rural farmers. This master's project analyzes findings from a 113-household, 7-village survey completed in the summer of 2011. The results explore the social and financial incentives of rural villagers living in and around the Hunchun Nature Reserve. Currently, the husbandry of free-ranging cattle within the reserve is one of the greatest factors in habitat encroachment and destruction. The government in northeast China has announced that the beef industry is a target growth area – a development that could cause the Amur tiger to be extirpated from this reserve. Findings show that cattle-raising is an insignificant part of rural household income, and serves as a source of cash flow. Major barriers to community conservation projects in Hunchun are a lack of trust between villagers and a lack of local leadership talent. These findings, analyzed in conjunction with an eye toward social and market forces, will help WCS China assess and implement community conservation plans to preserve the habitat that Amur tigers require to survive.
Type
Master's project
Department
Nicholas School of the Environment and Earth Sciences
Subject
Conservation in China
Amur Tiger
Community-based Conservation
WCS
Hunchun
Permalink
https://hdl.handle.net/10161/5221
Citation
Chin, Jennifer A. (2012). Social and Financial Incentives for Amur Tiger (Panthera tigris altaica) Conservation in Northeast China. Master's project, Duke University. Retrieved from https://hdl.handle.net/10161/5221.
Collections
More Info
Show full item record