Measuring the Impact of the Medicare Prescription Drug, Improvement, and Modernization Act of 2003 on Shortages of Sterile Injectable Oncology Drugs 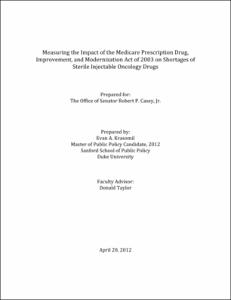 View / Download
1.3 Mb
Date
Author
Krasomil, Evan
Advisor
Taylor, Donald Hugh
Repository Usage Stats
370
views
1,565
downloads
Abstract
The problem of U.S. pharmaceutical drug shortages is one that has steadily grown in severity over the course of the past decade, particularly in the years since 2006. Some types of drugs have proven to be more susceptible to shortage than others, particularly sterile injectable drugs. Many oncology drugs are sterile injectables, and an increasing number of sterile injectable oncology drugs have been subject to shortage in recent years. Shortages can led to delayed treatments, errors stemming from the use of alternative drugs, increased costs, and negative patient outcomes including death. While shortages occur for a number of different reasons, some have blamed changes contained within the Medicare Prescription Drug, Improvement, and Modernization Act (MMA) of 2003 that changed the way that Medicare reimbursement rates for drugs were calculated. Contrary to assertions that MMA is capping the growth rates of reimbursements for drugs and thus causing shortages to occur, the new MMA rate formula does not appear to be limiting the rate at which reimbursements can grow. This report does recommend, however, that the current reimbursement formula be adjusted so that rates are based on data gathered monthly rather than quarterly, reducing the length of the delay between price signals from the drug market and the adjustment of reimbursement rates.
Type
Master's project
Department
The Sanford School of Public Policy
Subject
Health
Medicare
Drug Shortages
Permalink
https://hdl.handle.net/10161/5236
Citation
Krasomil, Evan (2012). Measuring the Impact of the Medicare Prescription Drug, Improvement, and Modernization Act of 2003 on Shortages of Sterile Injectable Oncology Drugs. Master's project, Duke University. Retrieved from https://hdl.handle.net/10161/5236.
Collections
More Info
Show full item record