Mapping Past and Future Permafrost Extent on the North Slope Borough, Alaska 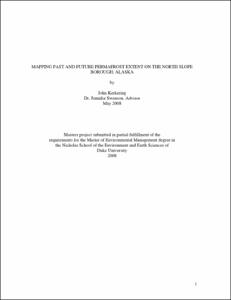 View / Download
5.6 Mb
Date
Author
Kerkering, John
Advisor
Swenson, Jennifer J
Repository Usage Stats
380
views
618
downloads
Abstract
The proportion of the Earth's land area that is underlain by permafrost, currently about 25%, is widely anticipated to shrink in response to climate change. Numerous models have been employed to project potential permafrost distribution into the mid- to latter 21st century given an expected rise in global temperature. This analysis complements these efforts by using the temperature at the top of permafrost (TTOP) model on past and future climate data for the North Slope of Alaska, an area for which the TTOP has not yet been applied. First, using a climate time-series dataset, trends in permafrost temperatures were determined for the North Slope from 1901 to 1999. Relative to the 20th century TTOP mean, mean TTOP for five-year intervals spanning the entire century remained within 1ÂºC below or above the mean, although a clear warming trend was evident from 1986 to 1999. Second, four climate models (HadCM3, CGCM2, PCM, and CSIRO2) were used to project trends in permafrost temperatures in the North Slope under the A1FI climate change scenario developed by the Intergovernmental Panel on Climate Change. All models revealed a clear warming trajectory across the 21st century. The average difference of mean TTOP for five-year intervals spanning the century against the 21st century TTOP mean was +0.0226 degrees Celsius. Comparing temperature differences between the latter twenty-five years of both centuries revealed a relative temperature difference of +1.068 degrees Celsius. This clear warming trend suggests that under the A1FI scenario, permafrost degradation may occur across the North Slope, resulting in the probable destabilization of Arctic infrastructure and ecosystems.
Type
Master's project
Department
Nicholas School of the Environment and Earth Sciences
Subject
Permafrost
North slope
Alaska
Climate change
Active layer
Thaw
Permalink
https://hdl.handle.net/10161/524
Citation
Kerkering, John (2008). Mapping Past and Future Permafrost Extent on the North Slope Borough, Alaska. Master's project, Duke University. Retrieved from https://hdl.handle.net/10161/524.
Collections
More Info
Show full item record