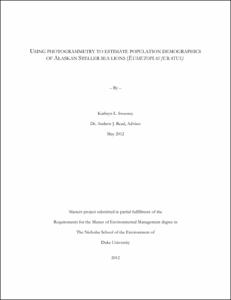 View / Download
1.1 Mb
Date
Author
Sweeney, Katie
Repository Usage Stats
266
views
299
downloads
Abstract
Steller sea lions (Eumetopias jubatus) experienced a precipitous 80% decline in abundance over a 25-year period starting in the mid-1970s. The decline occurred at different rates over the range of the species, which is comprised of two Distinct Population Segments (DPS). The endangered western DPS stabilized in 2004, but stark regional differences have been observed within the six regions that comprise this DPS; increases in abundance in the eastern four regions of the range have been largely offset by significant declines in the two western regions. In contrast, the threatened eastern DPS, which occurs in southeast Alaska, is recovering and currently being considered for delisting under the Endangered Species Act. Aerial surveys of haul out and rookery sites (sites with >50 pups born annually) offer snapshots of abundance and population health, but ecological mechanisms driving population dynamics cannot be inferred from these surveys. Current methodologies employed to study vital rates (i.e., survival, recruitment, and natality) are limited to a relatively small number of rookeries, leaving gaps in age-structure information across the Alaskan range —most notably in the central and western Aleutian Island regions, which continue to experience significant declines. In the present study, photogrammetric methodologies were developed which allowed the measurement of lengths of individual Steller sea lions from images captured during a 2008 aerial survey. These length data were then used to provide estimates of the proportion of different age and sex classes in various regions. Standard lengths of sea lions were measured from vertical digital images. All sea lions observed in close proximity to a pup or juvenile were considered adult females, thus providing a category of “known” adult females. All standard lengths assigned a Straightness Classification of 3 - lying straight along their long axis with only minor curvature at either the posterior or anterior portion of the body - were used in analysis. An altitude calibration flight was performed in Sitka, Alaska in which images of the runway number were obtained (for which true dimensions were known) and linear regressions were performed to correct for bias in altitude measurements collected from the radar altimeter. The resulting regression equations were combined to produce an equation to convert measured lengths (Lm; pixels) to “true” lengths of sea lions (Lp; m) using altitude measurements from the radar altimeter (Hm; ft): Lp= Lm ( 3.742E-3Hm + 8.003E-3 ). Converted length data were applied to a finite mixture distribution model to estimate the proportion of the population comprised of three age-sex classes—juvenile (males and females), adult female and adult male. To minimize bias due to the effects of sample size and site selection, broad regional comparisons of rookery, haul out, and combined sites were conducted for the eastern and western DPS, as well as a comparison of two areas within the range of the western DPS experiencing contrasting abundance trends. Females in the eastern DPS were significantly smaller than those in the western; and amongst the western DPS regions, females in the center portion of the range were larger than in two fringing regions. Range-wide estimates of vital rates and age structure of Steller sea lions may help to identify environmental or anthropogenic drivers that are impeding the recovery of the western DPS of Steller sea lions in Alaska.
Type
Master's project
Department
Nicholas School of the Environment and Earth Sciences
Permalink
https://hdl.handle.net/10161/5242
Citation
Sweeney, Katie (2012). Using Photogrammetry to Estimate Population Demographics of Alaskan Steller Sea Lions (Eumetopias jubatus). Master's project, Duke University. Retrieved from https://hdl.handle.net/10161/5242.
Collections
More Info
Show full item record