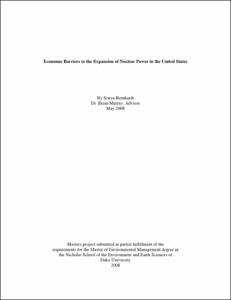 View / Download
249.7 Kb
Date
Author
Reinhardt, Sonya
Advisor
Murray, Brian
Repository Usage Stats
745
views
3,309
downloads
Abstract
The Nuclear Regulatory Commission (NRC) is gearing up for a surge in new nuclear power plant applications for the first time in thirty years. Although a new nuclear power plant has not been built in the U.S. in twenty years, concerns about climate change and an increased interest in energy security have put nuclear power back on the table as a technically viable energy option that can provide base load power without emitting carbon dioxide. However, the history of nuclear technology in the U.S. and lower electricity costs from fossil fuels do not allow nuclear power to be competitive on its own. This situation and the capital costs involved in building a nuclear power plant create tremendous economic barriers for the industry. Through an examination of economic barriers, this project attempts to determine whether or not new nuclear power plants can be built in the United States. If they can, what are the key indicators that this is so? If not, what policies could possibly reverse this outcome? The methods to answer these questions include a literature review, personal interviews with NRC employees, and a policy analysis. The analysis section focuses on how current and prospective legislation could address barriers to a nuclear expansion. The results indicate that the competitiveness of nuclear power will be addressed by Production Tax Credits the 2005 Energy Policy Act for the first 5 or 6 plants that are approved by the NRC. Carbon-limiting legislation will assist a nuclear expansion beyond this initial build. An international bottleneck for nuclear-grade materials will slow a nuclear expansion; however, it is likely that the nuclear-grade manufacturing industry will expand. Ultimately, the most significant barrier to a nuclear expansion in the U.S. is the storage of high-level nuclear waste. Yucca Mountain has been embroiled in political controversy since 1982, and the nation’s nuclear waste continues to accumulate on-site at 104 operating reactors across the country. Absent technical solutions like reprocessing or the opening of a geologic repository, moving forward with a significant expansion of the commercial nuclear power sector in the U.S. will be difficult.
Type
Master's project
Department
Nicholas School of the Environment and Earth Sciences
Subject
Nuclear Regulatory Commission
nuclear power
nuclear power plant
economic barriers
nuclear expansion
levelized cost
Permalink
https://hdl.handle.net/10161/526
Citation
Reinhardt, Sonya (2008). Economic Barriers to the Expansion of Nuclear Power in the United States. Master's project, Duke University. Retrieved from https://hdl.handle.net/10161/526.
Collections
More Info
Show full item record