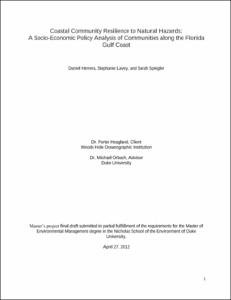 View / Download
3.6 Mb
Date
Authors
Sarah, Spiegler
Stephanie, Lavey
Daniel, Herrera
Advisors
Orbach, Michael K.
Porter, Hoagland
Repository Usage Stats
452
views
421
downloads
Abstract
This master’s project is the beginning of a 5-year investigative effort by Woods Hole Oceanographic Institution and Mote Marine Lab studying the harmful effects of red tides. This paper investigates the resilience of coastal communities in western Florida in the face of natural hazards. On Florida’s Gulf Coast, despite chronic exposure to natural hazards, coastal communities are growing in population and economic scale. Coastal development is often haphazard and unplanned, resulting in degradation of fragile and hazard-prone coastal ecosystems. This places communities at greater risk to the effects of coastal hazards. This paper hypothesizes that, although it is unlikely that natural disasters independently drive economic trends in this region, their presence exacerbates preexisting vulnerable economic conditions on an annual time-scale. This study investigates community resilience of Florida’s 23 Gulf Coast counties, exploring the adaptive capacity of the counties to absorb shocks while maintaining essential functions. Community resilience of western Florida is affected by the spatial and temporal distribution of hazard exposure. This paper assumes the effects of hazards are reflected in annual economic and population data for the year following the hazard. It categorizes historical storms and red tides and responses to these events via trends in four economic indicators for each county from 1969 to 2011; population, employment, per capita income, and number of proprietors. The results of this study show there were very few changes in the trends of the economic indicators after one year for most of the hazard events. The majority of economic and demographic data show persistent increases between 1969 and 2011, indicating that the Florida Gulf Coast system is resilient to red tides and hurricanes. Decreases in economic data trends were more closely correlated to years of economic recessions, not red tide blooms or major hurricanes years. This analysis suggests that storms and red tides may exacerbate decreases in economic and demographic data in the year following the storm, but that counties rebound to previous levels after one year. It concludes that perturbations from normal economic and population trends are most likely due to a combination of factors, such as economic recessions or anomalous air temperatures, along with natural hazards. It is also possible that effective government policies enhancing and protecting social and economic resilience can be addressed through public polices over time in response to hazard events, contributing to the increased resilience of coastal communities. Policies that plan, mitigate, and adapt to these hazards create a more resilient socio-economic system. Because the effects of these policies are not always immediately clear, resilience planning is difficult. Red tides and hurricanes place the growing population of Florida at greater risk for structural damage and economic downturns following hazard events. Increasing population in the Gulf Coast of Florida and the impending effects of climate change may decrease community resilience in the future. It is necessary for policymakers to consider these challenges and others inherent in resiliency planning. This paper concludes with a compilation of policy recommendations based on resilience research that state and local officials may consider for mitigating harmful effects of natural hazards.
Type
Master's project
Department
Nicholas School of the Environment and Earth Sciences
Subject
natural hazards
community resilience
hurricanes
red tides
Florida
Gulf Coast
Permalink
https://hdl.handle.net/10161/5270
Citation
Sarah, Spiegler; Stephanie, Lavey; & Daniel, Herrera (2012). Coastal Community Resilience to Natural Hazards: A Socio-Economic Policy Analysis of Communities along the Florida Gulf Coast. Master's project, Duke University. Retrieved from https://hdl.handle.net/10161/5270.
Collections
More Info
Show full item record