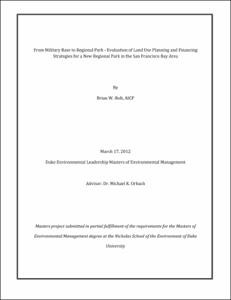 Files
Holt MP Final.pdf
4.5 Mb
Holt.MP.Abstract.042312 Signed.pdf
118.1 Kb
Date
Author
Holt, Brian
Advisor
Orbach, Michael
Repository Usage Stats
294
views
275
downloads
Abstract
The San Francisco Bay Area played a central support role in the efforts of the United States military during World War II with military facilities providing a coastal fortress, shipbuilding center, and shipping gateway to the Pacific. Beginning in the late 1980’s, many of the region’s military facilities have closed with local governments re-envisioning new neighborhoods, restored habitats, and community facilities on the properties. Two decades after the first round of the Base Realignment and Closure process, however, many former military facilities remain undeveloped with planning visions yet to be realized. The latest military facility to close in the region is the Concord Naval Weapons Station. Located approximately 30 miles from San Francisco in the suburban east bay community of Concord, the Concord Naval Weapons Station consists of over 5,000 acres of abandoned munitions bunkers, rolling hills, and vast grasslands being planned for reuse. Led by the City of Concord, a Reuse Plan was adopted that balanced development with open space protection calling for over 13,000 new homes, extensive commercial development, and an array of community facilities occupying less than a half of the property. The remaining property is slated to become a new regional park to be managed by the East Bay Regional Park District. This Masters Project evaluates the opportunities and constraints of the future regional park property to develop a conceptual land use plan and identifies the potential financing tools that can be applied. Additionally, it looks at the threats, opportunities, weaknesses, and strengths of the East Bay Regional Park District, its potential partners and stakeholders, and the land itself to craft recommendations that will ensure community and environmental benefits are realized in a timely fashion.
Type
Master's project
Department
Nicholas School of the Environment and Earth Sciences
Subject
BRAC
conservation finance
open space planning
new urbanism
habitat conservation
outdoor recreation
Permalink
https://hdl.handle.net/10161/5271
Citation
Holt, Brian (2012). From Military Base to Regional Park - Evaluation of Land Use Planning and Financing Strategies for a New Regional Park in the San Francisco Bay Area. Master's project, Duke University. Retrieved from https://hdl.handle.net/10161/5271.
Collections
More Info
Show full item record