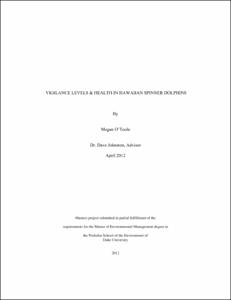 View / Download
377.2 Kb
Date
Author
O'Toole, Megan Marigold
Advisor
Johnston, David
Repository Usage Stats
250
views
268
downloads
Abstract
Over the past several decades, Hawaiian spinner dolphins have become a species of interest for both scientists and tourists alike. Spinner dolphins can be found resting in the bays of coastal Hawaii almost daily, and their habits have been noted by the burgeoning ecotourism industry and increased human presence. While no in depth studies have been performed on the dolphin populations, these increased interactions have researchers concerned about the vulnerability of the dolphin population. Dukas & Clark (1995) hypothesize that a key unexplored factor in animal health is vigilance level, or the ability of the animal to process complex patterns such as foraging or detecting predators based on the amount of rest they are able to obtain. As the lifestyle of spinner dolphins puts them at extreme risk for lowered vigilance levels, the equations put forward in the article were used to create a bio-energetics model that would illustrate its potential effects on their ability to capture prey and evade predators. While short-term vigilance loss does not appear to be significantly damaging to the dolphin’s ability to feed and protect itself, a long-term loss may greatly affect a spinner dolphin’s overall health. These findings indicate that the current human presence in the bays during the spinner dolphins’ resting hours has the potential to detrimentally affect their health and consequently their population numbers and should serve as a starting point for further vigilance based research.
Type
Master's project
Department
Nicholas School of the Environment and Earth Sciences
Subject
Spinner dolphin
Health
Tourism
Vigilance
Hawaii
Permalink
https://hdl.handle.net/10161/5274
Citation
O'Toole, Megan Marigold (2012). VIGILANCE LEVELS & HEALTH IN HAWAIIAN SPINNER DOLPHINS. Master's project, Duke University. Retrieved from https://hdl.handle.net/10161/5274.
Collections
More Info
Show full item record