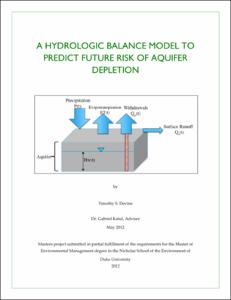 View / Download
1.2 Mb
Date
Author
Devine, Timothy
Advisor
Katul, Gaby
Repository Usage Stats
264
views
1,460
downloads
Abstract
As demand for freshwater resources rises, the importance of conservation and preservation of ground-water resources become necessary, especially in coastal areas where large-scale seawater intrusion is a risk. A hydrologic balance model that employs historic records of precipitation, reference evapotranspiration estimates and future scenarios of withdrawal rates is developed and used to forecast future groundwater levels. These model forecasts are examined with a lens on the likelihood of 'dangerous' aquifer depletion (i.e. a level that promotes sea water intrusion). This model uses the Central Coastal Plain Capacity Use Area (CCPCUA) in eastern North Carolina as a case study. This case study is selected here because of (i) ground water level data availability prior to and post- imposed reductions of groundwater withdrawal rates (per capita), (ii) long-term historic records of rainfall and estimated of reference evapotranspiration. In this first-order analysis, a logical starting point in model development is to assume that the network of regional aquifers within CCPCUA are perfectly connected and equally accessible to pumping, the water level within the aquifer is uniform (but not steady) and the aquifer hydraulic properties (such as specific yield) are uniform in space. Under those idealized conditions, the hydrologic balance at this large-scale can be treated as 'lumped' in space - so that water level redistribution in space within the aquifer is highly efficient and only temporal dynamics of the water levels in this lumped representation need to be accounted for. The impact of specific yield, initial water depth, total population and its projection, per capita consumption (and its future regulation), precipitation rates, reference evapotranspiration rates and sea level rise on aquifer depletion are examined. The MP demonstrates how various management scenarios intended to mitigate groundwater resource depletion can be examined and cross-compared via model-assisted simulations, even in such idealized model-world.
Type
Master's project
Department
Nicholas School of the Environment and Earth Sciences
Subject
Aquifer Depletion
CCPCUA
Groundwater Model
Hydrologic Balance
Permalink
https://hdl.handle.net/10161/5286
Citation
Devine, Timothy (2012). A Hydrologic Balance Model to Predict Future Risk of Aquifer Depletion. Master's project, Duke University. Retrieved from https://hdl.handle.net/10161/5286.
Collections
More Info
Show full item record