A quantitative analysis of the response of short-finned pilot whales, Globicephala macrorhynchus, to biopsy attempts 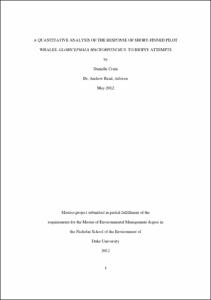 View / Download
1.6 Mb
Date
Author
Crain, Danielle
Advisor
Read, Andrew
Repository Usage Stats
375
views
341
downloads
Abstract
Remote biopsy sampling is a common method used to obtain tissue samples from wild cetaceans. Using this technique, researchers typically obtain a small sample of skin and blubber using a biopsy tip fired from a crossbow or modified air rifle. Analysis of these tissues can provide important information on specific identity, sex, pollutant levels, diet, and reproductive status, which are critical to studies of free-ranging cetaceans. Biopsy sampling is generally considered to be a relatively benign procedure, but all prior attempts to evaluate its impact have been subjective assessments of the behavioral response of individuals at the surface. The goal of the present study is to provide a quantitative assessment of the immediate effects of biopsy attempts on the behavior of short-finned pilot whales (Globicephala macrorhynchus) equipped with digital acoustic recording tags (DTags) off Cape Hatteras, North Carolina. A biopsy attempt was defined as any instance of contact between a biopsy dart with an animal. A series of five metrics was examined to determine if behavior of whales was affected by a biopsy attempt, including: foraging behavior (number of dives, depth, and number of prey capture attempts); time spent within 3 m of the surface; fine-scale body orientation; fluke rate and amplitude; and group vocalization rate. The short-term reactions to biopsy attempts appear to be ephemeral and should not compromise the fitness of the animal, although the effects of increasing the group vocalization rate after a biopsy attempt should be examined further. The results of this analysis provide the first subsurface, quantitative assessment of the short-term effects of biopsy sampling on cetaceans.
Type
Master's project
Department
Nicholas School of the Environment and Earth Sciences
Subject
biopsy
behavioral responses
pilot whales
vocalization rate
DTag
Permalink
https://hdl.handle.net/10161/5288
Citation
Crain, Danielle (2012). A quantitative analysis of the response of short-finned pilot whales, Globicephala macrorhynchus, to biopsy attempts. Master's project, Duke University. Retrieved from https://hdl.handle.net/10161/5288.
Collections
More Info
Show full item record