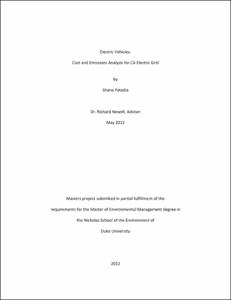 View / Download
925.7 Kb
Date
Author
Patadia, Shana
Advisor
Newell, Richard
Repository Usage Stats
280
views
291
downloads
Abstract
Electric vehicles have been suggested as one of the primary possible solutions to fuel dependency and emissions reduction, but hesitation has been expressed as to the actual emissions reductions that electric vehicles would bring as well as the cost impacts on the individual vehicle owner. This Masters Project analyzes the impacts of various scenarios of the integration of a passenger electric vehicle fleet into the California electric grid through Vehicle to Grid Services (V2G). The central focus of this analysis was to determine what percentage of vehicles can complete their standard driving behavior with an electric vehicle based on different assumptions of charging availability as well as battery and charging technology assumptions. To accommodate a range of possible future grid situations, three technology scenarios were conducted. Using these three grid scenarios the model was also able to show what the approximate cost would be per vehicle-week and vehicle-mile of using electric charging. The data showed that even the pessimistic technology baseline demonstrated superior costs and emissions as compared to conventional vehicles. All three scenarios reduced emissions by more than three-fold and the cost per mile was found to be an eighth of the conventional vehicle cost. The cost differences result from lower electricity “fueling” costs as compared to gasoline fueling costs, as well from the earnings the vehicles received from selling their electricity to the grid through V2G. At maximum, a total of 65 vehicles out of 841 vehicles “failed” meaning that the model could not find a way to allow them completion of their driving. This has significant implications as many concerns exist as to the feasibility of electric vehicles for the majority of drivers, but this data demonstrates that less than 8% of the employed population in CA has driving unfit for electric vehicles. The remainder of the population, 92%, could complete their driving under an aggregator controlled V2G scheme. These conclusions imply that a reasonable amount of investment into Level 2 chargers and Vehicle to Grid infrastructure, could result in savings or the consumer, increased frequency regulation for the grid, and significant emissions reductions.
Type
Master's project
Department
Nicholas School of the Environment and Earth Sciences
Subject
electric vehicles
vehicle to grid
cost optimization
emissions reductions
california
vehicle charging
Permalink
https://hdl.handle.net/10161/5296
Citation
Patadia, Shana (2012). Electric Vehicles: Cost and Emissions Analysis for CA Electric Grid. Master's project, Duke University. Retrieved from https://hdl.handle.net/10161/5296.
Collections
More Info
Show full item record