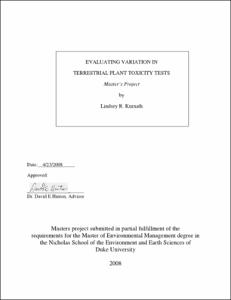 View / Download
736.2 Kb
Date
Author
Kurnath, Lindsey
Advisor
Hinton, David E
Repository Usage Stats
278
views
305
downloads
Abstract
The Office of Pesticide Programs of the U.S. EPA conducts the national pesticide review process, under authority granted by FIFRA. Ecological risk assessments are performed on many different organisms to identify ecosystem-level impacts. Among these organisms are non-target terrestrial plants, which are specifically used to understand the risk to plants exposed to spray drift or runoff. Guidelines were developed from field-based methods rather than a traditional interlaboratory precision analysis, thus the natural variation in measurement endpoints for terrestrial plant toxicity tests has not been established. Recognizing the inherent sensitivity of the assessments currently conducted helps the U.S. EPA better understand the implications of the pesticide review process. The following report aims to determine the natural variability of the response endpoints (i.e. emergence, plant length, plant weight) for these studies. This project involved the development and design of two databases in MS Access, the selection of control data from existing studies, an analysis of the among and within laboratory variability in response measures, and a trend analysis for environmental conditions. The findings supported the currently accepted coefficient of variation (CV) of 20% used by the U.S. EPA. All seedling emergence studies in all laboratories had average CV values of less than 40% and laboratories who were responsible for conducting a majority of the studies exhibited CV values less than 20%. Similar patterns were observed in the length data from the vegetative vigor studies. The weight data presented variation that was often greater than the expected 20% even for the most frequently tested species. The most data was available for corn and soybean plants and these species were also the least variable. The historical value of a 20% coefficient of valuation seems to be, on average, an acceptable value for the terrestrial plant toxicity tests used for pesticide registration. The data of this report indicates particular species, specifically corn and soybean, tend to have CV values closer to 10%. The addition of more data and a more sophisticated analysis into the underlying causes of variation could reveal a lower CV across all species.
Type
Master's project
Department
Nicholas School of the Environment and Earth Sciences
Subject
Terrestrial Plants
Variation
Pesticides
Toxicity Tests
Permalink
https://hdl.handle.net/10161/532
Citation
Kurnath, Lindsey (2008). Evaluating Variation in Terrestrial Plant Toxicity Tests. Master's project, Duke University. Retrieved from https://hdl.handle.net/10161/532.
Collections
More Info
Show full item record