Assessing the Potential for Community Solar in Durham, North Carolina 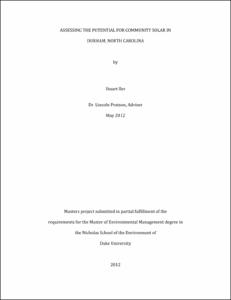 View / Download
2.8 Mb
Date
Author
Iler, Stuart
Advisor
Pratson, Lincoln F.
Repository Usage Stats
977
views
1,710
downloads
Abstract
Several barriers work against the deployment of rooftop solar photovoltaic systems in Durham and across the country. These include high initial investments that can outweigh benefits, operation and maintenance responsibilities, potentially lengthy payback periods, and significant transaction costs. The community solar model – which encompasses a set of innovative ownership, financing, and other mechanisms – is one option for overcoming these obstacles. There are many potential benefits of community solar, with two primary objectives being reduced initial costs and increased access to renewable energy. Other potential benefits include better economies of scale, more flexibility in choosing an optimal solar site, greater public awareness and understanding of solar energy, the potential for local job creation, and the opportunity to test new ownership and financing structures. This project assesses the degree to which community solar might provide benefits in Durham as measured by two key metrics: reduced costs and increased access to renewable energy. A Geospatial Information Systems (GIS) analysis of three Durham study areas was conducted to estimate the size of possible rooftop solar systems and the amount of annual energy they would provide. A simple energy cost ratio – obtained by dividing total installed cost by annual energy output – was calculated for each parcel, and then averages were determined for each of three parcel categories: residential, commercial, and community service. Graphs were also created to illustrate the relationships between suitable solar rooftop areas, differences in energy cost ratios, and parcels of different types. The analysis provides evidence that the community solar approach has the ability to both reduce the costs of and increase access to renewable solar energy. Although some residential parcels have rooftops that could host cost-efficient systems, for many homeowners a financial advantage might be realized through investment in a community solar project. The study also found that approximately 10% of residential parcels are not suitable for solar systems, while an additional 18% are suitable only for systems smaller than 1 kW. For these people, as well as for those who live in apartment buildings, the opportunity to invest in community solar would be a tangible increase in access to the benefits of renewable energy. As such, the paper concludes by recommending that legislation extending the net metering concept to community energy be adopted at the North Carolina state level.
Type
Master's project
Department
Nicholas School of the Environment and Earth Sciences
Subject
Community Energy
Renewable Energy
Solar Photovoltaic
GIS
Permalink
https://hdl.handle.net/10161/5326
Citation
Iler, Stuart (2012). Assessing the Potential for Community Solar in Durham, North Carolina. Master's project, Duke University. Retrieved from https://hdl.handle.net/10161/5326.
Collections
More Info
Show full item record