A Preliminary Examination of the Impacts of Faith and Religion in the Use of Common-Pool Resources: The Case of Artisanal Fisheries in Kino Bay and Punta Chueca, Mexico 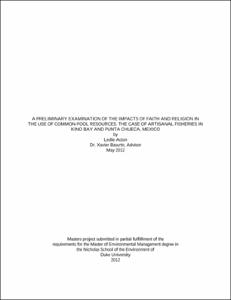 View / Download
636.2 Kb
Date
Author
Acton, Leslie
Advisor
Basurto, Xavier
Repository Usage Stats
511
views
967
downloads
Abstract
Researchers studying common-pool resources have historically not given enough attention to the influence of faith and religion among fisheries resource users. However, the ethics and value systems taught by religious leaders and understood by faithful peoples might play an important role in individual decision-making and community dynamics. To increase our understanding of the relationship between faith, religion and fishing common-pool resource use patterns, I conducted a pilot study to explore this issue in Kino Bay and Punta Chueca, two small-scale fishing communities located in the Gulf of California. These two communities are heavily dependent, both economically and culturally, on the health of nearby fishing grounds. I collected data using participant observation and semi-structured interviews with fishers over the course of 52 days in the field during May, June, July and October of 2011. Interviews explored the effects of faith and religion on fishers’ perceptions of fisheries management, fishers’ behavior while fishing, and interactions between fishers. Findings from this pilot study suggest that faith and religion play an important role in the lives of fishers in both Kino Bay and Punta Chueca. Most of the interviewees in both communities believe that human behaviors impact the quantity of fish which God provided. Evangelical interviewees in Kino Bay indicated that their churches teach strict adherence to secular fishing laws, and that their interactions with Catholic and non-religious fishers in this community sometimes result in tension and unequal treatment within the fisheries. Conversely, interviewees in Punta Chueca, which houses only one Evangelical church and no Catholic church, suggest fewer direct impacts and conflicts due to religion in their fisheries. These preliminary findings provide a useful basis for future research to validate, triangulate, and explore the issue in greater depth. They also add to the limited, but growing collection of studies examining the role of faith and religion in common-pool resource management.
Type
Master's project
Department
Nicholas School of the Environment and Earth Sciences
Subject
fisheries
faith
religion
common-pool resources
Mexico
Permalink
https://hdl.handle.net/10161/5330
Citation
Acton, Leslie (2012). A Preliminary Examination of the Impacts of Faith and Religion in the Use of Common-Pool Resources: The Case of Artisanal Fisheries in Kino Bay and Punta Chueca, Mexico. Master's project, Duke University. Retrieved from https://hdl.handle.net/10161/5330.
Collections
More Info
Show full item record