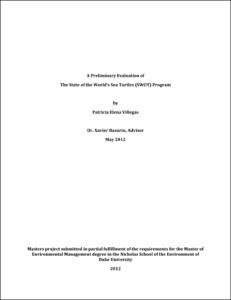 View / Download
9.8 Mb
Date
Author
Villegas, Patricia Elena
Advisor
Basurto, Xavier
Repository Usage Stats
471
views
460
downloads
Abstract
The State of the World’s Sea Turtles (SWOT) Program was created in 2003 with the goal of creating a dynamic, global-scale, geo-referenced nesting database of all marine turtle species, a network of people who generate and use the data, and a targeted communications and outreach strategy centered around an annual report. The Program is a collaboration of hundreds of individuals and institutions around the world including Oceanic Society, Duke University’s OBIS-SEAMAP, and the Marine Turtle Specialist Group (MTSG) of the International Union for Conservation of Nature (IUCN). SWOT has grown to include more than 550 data providers and has published and distributed seven SWOT Reports with award-winning maps on global marine turtle nesting distribution for the seven marine turtle species. This preliminary study highlights the importance of assessing the efficacy of the SWOT Program and its tools in order to determine whether it has been successful in advancing marine turtle research and conservation. Specifically, the study determines if SWOT products are used, how they are used by SWOT members, member expectations, and how the Program can be improved to better contribute to on-the-ground marine turtle research and conservation efforts. The preliminary evaluation presented within this text consists of a web-based survey to gauge knowledge, behaviors, and attitudes toward the SWOT Program. Thirty-three countries were represented from 172 completed surveys. Overall, survey results show that the SWOT Program has been successful in accomplishing its goals through a global network of researchers, a comprehensive database, and various communication strategies. The four most widely-used and well-known SWOT tools are the SWOT Report, maps, database, and website. These are the most well-established SWOT tools. Conversely, the lesser-known tools are those that are less established, such as the Small Grants Program, Outreach Toolkit, Minimum Data Standards, and TurtleVision. Recommendations presented herein, based on survey results, are to expand the SWOT database and network to include foraging/in-water data; establish regional networks in order to facilitate the production of regional tools; increase visibility within the global marine turtle community; expand and improve existing tools such as maps, grants, and accessibility and reliability of data; and hire an individual to manage and foment the SWOT Network.
Type
Master's project
Department
Nicholas School of the Environment and Earth Sciences
Subject
Sea Turtles, Marine Turtles, SWOT Program, Evaluation, Assessment, Survey
Permalink
https://hdl.handle.net/10161/5333
Citation
Villegas, Patricia Elena (2012). A Preliminary Evaluation of The State of the World's Sea Turtles (SWOT) Program. Master's project, Duke University. Retrieved from https://hdl.handle.net/10161/5333.
Collections
More Info
Show full item record