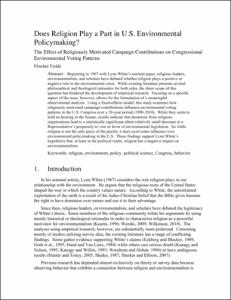 View / Download
640.5 Kb
Date
Author
Fields, Fletcher
Advisor
Vincent, Jeffrey
Repository Usage Stats
565
views
823
downloads
Abstract
Beginning in 1967 with Lynn White’s seminal paper, religious leaders, environmentalists, and scholars have debated whether religion plays a positive or negative role in the environmental crisis. While existing literature presents several philosophical and theological rationales for both sides, the sheer scope of this question has hindered the development of empirical research. Focusing on a specific aspect of the issue, however, allows for the formulation of a meaningful observational analysis. Using a fixed-effects model, this study examines how religiously motivated campaign contributions influence environmental voting patterns in the U.S. Congress over a 20-year period (1990-2010). While they seem to hold no bearing in the Senate, results indicate that donations from religious organizations lead to a statistically significant albeit relatively small decrease in a Representative’s propensity to vote in favor of environmental legislation. So while religion is not the only piece of the puzzle, it does exert some influence over environmental policymaking in the U.S. These findings support Lynn White’s hypothesis that, at least in the political realm, religion has a negative impact on environmentalism.
Type
Master's project
Department
Nicholas School of the Environment and Earth Sciences
Subject
Religion
Environmental Policy
Political Science
Congress
Behavior
Permalink
https://hdl.handle.net/10161/5356
Citation
Fields, Fletcher (2012). Does Religion Play a Part in U.S. Environmental Policymaking? The Effect of Religiously Motivated Campaign Contributions on Congressional Environmental Voting Patterns. Master's project, Duke University. Retrieved from https://hdl.handle.net/10161/5356.
Collections
More Info
Show full item record