Exploring Strategies to Address the Prevalence of Islamophobia in America 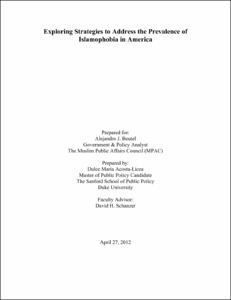 View / Download
709.6 Kb
Date
Author
Acosta-Licea, Dulce Maria
Advisor
Schanzer, David H.
Repository Usage Stats
924
views
1,282
downloads
Abstract
9/11 marked a notable rise in Islamophobia within American society that has since remained a prevailing reality. For the purposes of this paper, I define Islamophobia as a negative bias against Islam and/or Muslims expressed as hostile and discriminatory perceptions, sentiments, attitudes, and behavior towards Muslims and those perceived to be Muslim - including Sikhs, Arabs and South Asian Americans. Questioning, disagreeing with or critically analyzing Islam or Muslims is not necessarily Islamophobic. Just as Americans are not labeled anti-American for critiquing U.S. policies, those who critique Islam or Muslims should also not be automatically labeled as Islamophobes. The prevalence of Islamophobia is problematic because it threatens the wellbeing of its targets, the Islamophobes themselves and American society as a whole. To Muslims and others perceived to be Muslim, Islamophobia can ultimately motivate physical damage against their property and their actual person. As a type of prejudice, Islamophobia also threatens to restrict its targets’ “self image, educational success, occupational attainment, mental health status and health status.” A 2010 study confirms some of these effects by revealing that perceived Islamophobia-motivated “abuse and discrimination” is associated with “increased psychological distress, reduced levels of happiness and worse health status.” To Islamophobes, similar to the impact of racism on racists, Islamophobia could ultimately hinder Islamophobes’ ability to work effectively in pluralistic settings and could lead to “lower self-esteem and higher levels of anxiety.” As for society as a whole, Islamophobia erodes national unity, signals a departure from our nation’s core value of epluribus unum, and has the potential, as a form of prejudice, to spur mass murder and terrorism. Anders Breivik, the Norwegian terrorist who intended to “save Europe from Marxism and ‘Muslimization,’” stands as proof of Islamophobia’s terrorism potential. Islamophobia may also enable extremist groups like the Taliban and Al Qaeda to recruit and carry out terrorist attacks for two reasons. First, Islamophobia can result in the isolation and marginalization of its targets, which can leave them vulnerable and receptive to radicalization. Second, Islamophobia perpetuates the notion that the West is at war with Islam, which is a recruitment tactic used by such groups. The client for this Master’s project is the Muslim Public Affairs Council (MPAC), a policy advocacy nonprofit for the Muslim American community. MPAC is interested in knowing the possible range of efforts that should be taken to prevent future backlash - against Muslims and those perceived to be Muslim - if another domestic terrorist attack is implemented by a self-described Muslim. This paper explores possible strategies that have the potential to effectively reduce the current Islamophobia trend and minimize possible future resurgence: What efforts are feasible and sustainable with respect to curbing Islamophobia among the American public? This paper begins with an examination of the nature of the post-9/11 prevalence of Islamophobia in America, specifically how and to what extent it has manifested along with what factors are cited as sources behind of the Islamophobia trend. Next, the methodology section details the analytical strategy used to identify possible strategies. A menu of strategy options is then presented through the lens of a set of evaluative criteria. This paper ultimately concludes with a discussion on next steps in addressing Islamophobia in America. This project has relevant implications for a range of actors across society, including but not limited to: 1) policymakers who seek to maximize social welfare; 2) civil rights advocates across religious, racial, and ethnic minority communities who seek to combat bigotry; and 3) interfaith movements and organizations that seek to promote tolerance. This paper does not intend to present the ultimate, static solution to Islamophobia. Instead, the paper seeks to 1) identify possible strategies towards addressing Islamophobia in America and 2) contribute a foundation for which societal problems like Islamophobia can begin to be addressed in an organized and strategic manner.
Type
Master's project
Department
The Sanford School of Public Policy
Subject
public health
Islamophobia
discrimination
prejudice
9/11
terrorism
Permalink
https://hdl.handle.net/10161/5358
Citation
Acosta-Licea, Dulce Maria (2012). Exploring Strategies to Address the Prevalence of Islamophobia in America. Master's project, Duke University. Retrieved from https://hdl.handle.net/10161/5358.
Collections
More Info
Show full item record