Impact of Protected Areas on Forests in Madagascar 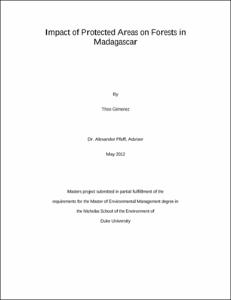 View / Download
2.2 Mb
Date
Author
Gimenez, Theo
Advisor
Pfaff, Alexander
Repository Usage Stats
269
views
816
downloads
Abstract
Madagascar is known for having one of the most diverse ecosystems in the world. Unfortunately, the country’s natural habitat has been declining for decades. One study estimated that only 7% of Madagascar’s original vegetation is intact. In 1927, Madagascar implemented its first Protected Areas (PAs). Prior to 2003, approximately 3% of the country’s land was protected. By 2008, this number more than tripled reaching 9.4% or just over 5.5 million hectares. Protected Areas have been used throughout the world to manage, conserve, and protect, geographic areas that would otherwise be subject to activities that could threaten their environmental and economic value. Nevertheless, few studies evaluate the effectiveness of PA networks with controls. The purpose of this study was to determine the impact Madagascar’s PAs have had on deforestation from 1990 to 2005. I use matching to make ‘apples to apples’ comparisons with respect to geographic land characteristics. A control method such as matching is essential since PAs are often non-randomly distributed. Estimates produced from matching show a .244% lower annual deforestation rate from 2000 to 2005 (.303%) than from 1990 to 2000 (.547%) in Madagascar’s PAs. Both rates are lower than naïve estimates and statistics reported in some previous studies. I also show that deforestation rates in Madagascar vary considerably with land characteristics regardless of the status of protection. This could have important implications for future forest conservation efforts since the impact of PAs vary with land characteristics as well.
Type
Master's project
Department
Nicholas School of the Environment and Earth Sciences
Subject
Protected Areas, Conservation, Environmental Economics, Matching, Deforestation,
Permalink
https://hdl.handle.net/10161/5359
Citation
Gimenez, Theo (2012). Impact of Protected Areas on Forests in Madagascar. Master's project, Duke University. Retrieved from https://hdl.handle.net/10161/5359.
Collections
More Info
Show full item record