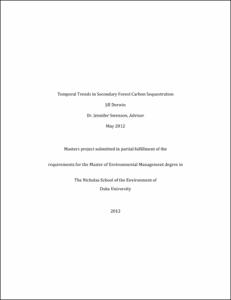 View / Download
4.3 Mb
Date
Author
Derwin, Jill M.
Advisor
Swenson, Jennifer
Repository Usage Stats
302
views
522
downloads
Abstract
With heightened concerns about climate change and greenhouse gas emissions, understanding the mechanics of carbon sequestration is becoming more important than ever. The world’s tropical forests are being sought for their increased ability to capture carbon in hopes that they might provide a solution to offset the emissions of industrialized nations. Techniques for the promotion of carbon sequestration are being explored in all disciplines with plans spanning international markets. The Brazilian Amazon is of particular interest in these discussions, however comprehensive data on carbon sequestration in the region has yet to be seen, reducing the accuracy of estimates of potential carbon sequestered. This study compared the carbon content of different-aged secondary forest stands to reach a deeper understanding of temporal trends in forest carbon sequestration using geospatial analysis and remote sensing techniques. I used Landsat 5 Thematic Mapper satellite images to create a multi-temporal classification of forested and non-forested areas for 1984 to 2006. I then merged the classifications to estimate age the secondary forests present to the east of the Brazilian Amazon over this 22-year period. The resulting tree ages were compared to standing aboveground carbon based upon existing estimates from the Woods Hole Research Center’s Pan-Tropical Forest Carbon dataset. An increase in accumulated carbon for increasingly older secondary forests was observed over an area of 58,038 km2. Deforestation rates in the study area have been generally decreasing since 1984, however in more recent years rising deforestation rates have been noted. Additionally, correlations were noted between carbon and latitude, precipitation, and temperature across the study area.
Type
Master's project
Department
Nicholas School of the Environment and Earth Sciences
Subject
carbon sequestration
Amazon
Brazil
secondary forest
Permalink
https://hdl.handle.net/10161/5364
Citation
Derwin, Jill M. (2012). Temporal Trends in Secondary Forest Carbon Sequestration. Master's project, Duke University. Retrieved from https://hdl.handle.net/10161/5364.
Collections
More Info
Show full item record