Gentrification in the Wake of the Subprime Mortgage Crisis 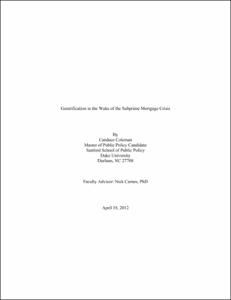 View / Download
2.5 Mb
Date
Author
Coleman, Candace
Advisor
Carnes, Nicholas William
Repository Usage Stats
1,450
views
4,857
downloads
Abstract
From the late 1990s until the mid-2000s, real residential property prices increased by more than 80 percent in the U.S. housing market. After U.S. home prices peaked in 2006, the demand for home purchases and construction fell sharply. During the Subprime Mortgage Crisis, more than 60 million Americans experienced foreclosure while overall home prices declined nearly 31 percent since 2006. This paper explores the short-term effects of the subprime crisis on the urban housing market. More specifically, my thesis seeks to answer the policy question: In the wake of the subprime mortgage crisis, what happened to gentrification in American cities? To better understand the relationship between the housing crisis and urban development, I will examine how the landscape of gentrification changed as a result of the collapsing U.S. housing market. From 2000 to 2006, gentrification became a mainstay of the American housing landscape. Researchers define gentrification as the process of rehabilitating depressed commercial and residential spaces in geographically urban areas. Many young, white, and college-educated homeowners purchased housing stock in urban neighborhoods for economic and aesthetic purposes. Although gentrification emerged in the 1960s, this phenomenon continued to grow during periods of economic decline. Many real estate experts believed that the subprime mortgage crisis would slow gentrification rather than stop the current trend indefinitely. Economists argue that an economic downturn forces capital to withdraw and retreat from land use possibilities in gentrifying urban areas. On the other hand, analysts argue that value-priced homes in center cities encourage investment from young urban-pioneers looking to purchase when the market has bottomed out. If “bargain hunters” are willing to invest now, they will benefit from lower home prices in neighborhoods driven by increases in the supply of single-family homes. In light of the Subprime Mortgage Crisis, this paper examines: • The effect of the subprime mortgage crisis on gentrification trends in 14 major metropolitan cities; and • Whether gentrification is driven by preferences for affordable housing stock, or preferences for historic and/or luxury builds in periods of economic decline. The key findings of the paper are: Gentrification Increased in Most Cities -- Overall, gentrification did not slow down in the U.S. in the wake of the recession. In most cities gentrification increased despite economic pressures in the housing and financial markets. Only a small number of cities experienced little or no changes in gentrification levels. Detroit was the only city with declining levels of gentrification. In Williamsburg and Greenpoint, strong preferences for certain neighborhood amenities helped maintain demand for housing after 2008. Increased median rents and home values show that the Subprime Mortgage Crisis did not deter interest in these up and coming neighborhoods. Gentrification is thriving and quickly expanding to other parts of the borough, mostly because these neighborhoods are well served by public transport to Manhattan. Despite the economic downturn, Washington, DC’s Columbia Heights neighborhood experienced an increase in home and rental prices. From 2000 to 2006, income-driven preferences fueled gentrification patterns in Columbia Heights. Additionally, the share of the white college educated population continued to grow between 2006 and 2009. Low unemployment in the District helped to maintain and expand gentrification patterns in the area. While de-industrialization is the main contributor to Detroit’s collapse, the Subprime Mortgage Crisis has only worsened city conditions. The city’s core gentrifying demographic of college educated professionals left the city in search of better employment opportunities. Detroit’s downtown areas are still plagued by high vacancy rates, poverty, and chronic unemployment. However, early-stage re-gentrifiers are looking to create a Williamsburg effect. Detroit’s ability to successfully re-gentrify in the future is very much dependent on a healthy job economy.
Type
Master's project
Department
The Sanford School of Public Policy
Subject
Gentrification
Urban Economics
Urban Housing Development
Subprime Mortgage Crisis
Williamsburg
Permalink
https://hdl.handle.net/10161/5368
Citation
Coleman, Candace (2012). Gentrification in the Wake of the Subprime Mortgage Crisis. Master's project, Duke University. Retrieved from https://hdl.handle.net/10161/5368.
Collections
More Info
Show full item record