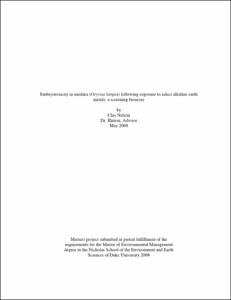 View / Download
168.3 Kb
Date
Author
Nelson, Clay
Advisor
Hinton, David
Repository Usage Stats
285
views
489
downloads
Abstract
Environmental exposure to radium, a radioactive alkaline earth metal, and barium, a chemically similar but non-radioactive earth metal, are of growing concern. Radium and barium levels in some groundwater aquifers exceed maximum contaminant levels, and future groundwater resources may be increasingly at risk. Surface waters may also be at risk from disposal of residual waters enriched in metals, including radium and barium, from the increased use of chemical filtration processes such as ion exchange or reverse-osmosis desalination to treat groundwater. Leaching of uranium mine tailings generated during mining activities and industrial uses of barium, including use in high-density oil and gas well drilling muds, serve as additional anthropogenic sources of these metals to surface waters. Currently, there is a lack of information on the effects of radium and barium on fish development. Such lack of data may complicate ecological risk assessment, as recruitment of young of the year fishes have been demonstrated to be major drivers of fish populations. I employed a high throughput, screening level bioassay to experimentally characterize toxicity in developing medaka fish embryos and eleutheroembryos (an embryonic phase starting with hatching and ending with absorption of yolk sac) following exposure to radium (radium-226 chloride) and barium (barium chloride). The ability to follow individual embryos over time and view embryonic development through the transparent chorion were key design characteristics of this experiment. Two endpoints, time to hatch and mortality, were concurrently assessed. Results of the bioassay failed to demonstrate evidence of embryotoxicity from exposure to radium at levels up to 60,000 pCi/L. Exposure to high levels of barium (100 ppm) resulted in earlier hatching time. Additionally, an increase in post-hatch mortality was observed, suggesting that the chorion may play a protective role with regard to alkaline earth metal exposure. Water chemistry appeared to affect the magnitude of post-hatch mortality, although results between different exposure scenarios used in the study were ambiguous. The lack of observed embryotoxicity from radium exposure does not definitively demonstrate that radium is not toxic, as other endpoints not assessed in this screening level bioassay may be more sensitive indicators of toxicity and effects from exposure during development may manifest themselves at later life stages. Results of the barium analysis suggest that young of the year fishes may be particularly sensitive to acute exposure to high levels of alkaline earth metals. This suggests that better management of radium and barium in the environment, including the disposal of brine solutions enriched in alkaline earth metals to surface waters, may be needed to reduce ecological risks to fish populations.
Type
Master's project
Department
Nicholas School of the Environment and Earth Sciences
Subject
embryotoxicity
alkaline earth metals
radium
barium
medaka
bioassay
Permalink
https://hdl.handle.net/10161/537
Citation
Nelson, Clay (2008). Embryotoxicty in medaka (Oryzias latipes) following exposure to select alkaline earth metals: a screening bioassay. Master's project, Duke University. Retrieved from https://hdl.handle.net/10161/537.
Collections
More Info
Show full item record