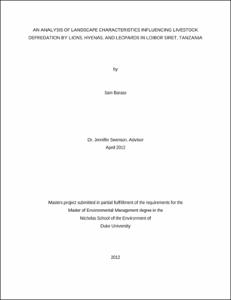 View / Download
2.7 Mb
Date
Author
Baraso, Sam
Advisor
Swenson, Jennifer Jane
Repository Usage Stats
501
views
400
downloads
Abstract
The African lion has declined precipitously across its entire range from nearly 500,000 in the early 1900s to roughly 35,000 individuals today. While a multitude of factors contributes to the lions’ decline, conflict with traditional pastoralists is one of the gravest threats. Lions, hyenas and leopards opportunistically prey on livestock including cattle, donkeys, goats, and sheep in pastoral regimes. However, lions are disproportionately blamed for livestock depredation and are common targets in retaliatory killings in many communities. Several NGOs including the African People & Wildlife Fund are finding ways to minimize predation incidences and thereby reduce retaliatory killings. Strategies such as corral fortification have reduced predation events within the homestead, however, a significant percentage of attacks are at the pasture. Using 54 months of carnivore/livestock conflict data in the Maasai Steppe of Tanzania, I assess the influence of landscape features to characterize the risk of predation at the pasture. By identifying factors contributing to greater predation risk, strategies to mitigate attacks at pasture can be designed. This way, herders will have greater capacity to protect their primary source of wealth and can better co-exist with predators. I found that proximity to bomas (corrals) is the most relevant landscape feature explaining the likelihood of attack across all three carnivores. After accounting for boma proximity, no other variable contributes a significant explanatory role, and attacks cannot be accounted for by landscape features alone. Fifty-three percent of all pasture predation occurs at night. Of these, roughly 71% occur on lost livestock. This study suggests that “lost livestock” represents an area of further research. After, the initiation of the Living Walls corral fortification program, boma predation declined by over ninety percent. Pasture predation also declines, though the causal mechanism is unclear. This study shows that environmental characteristics may be less important than social or behavioral characteristics of the herders in determining livestock predation at pasture.
Type
Master's project
Department
Nicholas School of the Environment and Earth Sciences
Subject
livestock predation
human wildlife conflict
landscape features
spatial
Maasai
Tanzania
Permalink
https://hdl.handle.net/10161/5374
Citation
Baraso, Sam (2012). AN ANALYSIS OF LANDSCAPE CHARACTERISTICS INFLUENCING LIVESTOCK DEPREDATION BY LIONS, HYENAS, AND LEOPARDS IN LOIBOR SIRET, TANZANIA. Master's project, Duke University. Retrieved from https://hdl.handle.net/10161/5374.
Collections
More Info
Show full item record