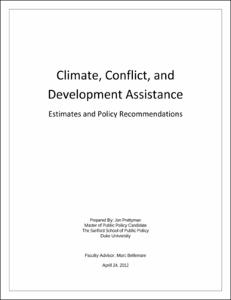 View / Download
822.1 Kb
Date
Author
Prettyman, Jon
Advisor
Bellemare, Marc
Repository Usage Stats
394
views
382
downloads
Abstract
Overview Global climate change is predicted to increase the number and severity of natural disasters and other severe weather events. Concern about how this change will affect the livelihoods, resources, and security of people, particularly those in developing and unstable nations, has led to a debate over the relationship between climate and the risk of conflict. To date, a clear link between climatic events and conflict has not been found. Results have been highly sensitive to issues of data selection and model specifications. In this paper I estimate two new models in an attempt to clarify any climate conflict relationship that may exist Data and Methods First, I test a global climate-conflict-aid relationship using country-year observations of violent civil conflict, natural disasters, official development assistance, and humanitarian assistance. This model is similar to much of the existing literature, but includes additional controls for international aid and aid’s interactive effects with disasters. Second, using geocoded conflict, rainfall, and development project data from East Africa I examine local, rather than national, conflict behaviors. I test if proximity to aid projects is a contributing factor to conflict frequency in Ethiopia, Kenya, and Uganda. This approach complements the cross country analysis because rainfall variation is the primary factor in most natural disasters reported in East Africa. Findings Using a cross county dataset including country-year observations in both the presence and absence of conflict or disaster incidence, I found no evidence that the incidence of natural disasters is a significant predictor of the risk of violent civil conflict. This finding of its self was not necessarily surprising since both disasters and conflicts are rare events. Interestingly, I do find that post-disaster humanitarian assistance appears to reduce the probability of conflict. While the erogeneity of the humanitarian assistance data in this model is suspect, this link deserves further study. Using a geocoded conflict dataset from East Africa comprised of subnational monthly observations of conflict incidence I found that extreme rainfall fluctuations lead to an increase in the number of conflict events in a given location. Extreme rainfall fluctuations are the primary cause of the most common natural disasters in East Africa, suggesting that country-year aggregation, using civil war incidence as a dependent variable, or the inclusion criteria from disasters may be hiding the link between climate and conflict. Conclusion I find that a link between climate and conflict is plausible and deserving of additional study. It appears that foreign aid influences this relationship, at least when delivered as humanitarian assistance, and may also instigate rent-seeking behavior on in the absence of climate variability. Policy makers should carefully consider these implications when planning future projects.
Type
Master's project
Department
The Sanford School of Public Policy
Subject
Violent Civil Conflict
Climate Change
Humanitarian Assistance
East Africa
Permalink
https://hdl.handle.net/10161/5381
Citation
Prettyman, Jon (2012). Climate, Conflict, and Development Assistance. Master's project, Duke University. Retrieved from https://hdl.handle.net/10161/5381.
Collections
More Info
Show full item record