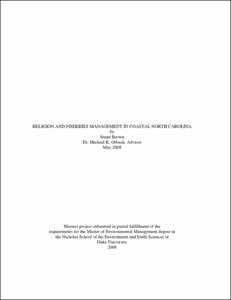 View / Download
140.0 Kb
Date
Author
Brown, Stuart
Advisor
Orbach, Michael
Repository Usage Stats
295
views
374
downloads
Abstract
Many fishermen and fisheries managers in Eastern North Carolina hold strong Christian beliefs which influence their attitudes toward the fishery, and therefore affect how the fishery is managed. In public meetings on fisheries management, scientific and economic discussions frequently turn into religiously charged arguments. Science-minded managers often withdraw from or dismiss these arguments, thus shutting off communication with a large portion of the stakeholders. Understanding the religious basis for many of the opinions held by fishermen and other stakeholders could help facilitate productive discussions of religion in fisheries management, and could facilitate the management process. I conducted interviews with fishermen, fisheries managers, and religious leaders in coastal North Carolina, to gain a better understanding of the religious roots of fishermen’s attitudes toward fisheries and fisheries management. I found that in many cases, fishermen’s opposition to management is based on powerful and sincerely held religious beliefs. Many Christian fishermen believe that God provides fish for the sole purpose of being harvested by humans. Just as common among fishermen is a belief that fishermen serve as stewards of the water and its resources. In a broader context, understanding how religion influences people’s values and behavior is very important for environmental conservation in general. Over the past decade there has been a movement among religious groups to take on environmental issues. Marine conservation could benefit greatly from engaging religious organizations. Many coastal fishing communities, like those in coastal North Carolina, Louisiana, and on the Chesapeake Bay, have large Christian populations. Appealing to Christian organizations, by framing marine conservation as a moral and ethical issue as well as an ecological or economic issue, could help mobilize many people and greatly help the cause.
Type
Master's project
Department
Nicholas School of the Environment and Earth Sciences
Subject
fisheries
Permalink
https://hdl.handle.net/10161/539
Citation
Brown, Stuart (2008). Religion and Fisheries Management in Coastal North Carolina. Master's project, Duke University. Retrieved from https://hdl.handle.net/10161/539.
Collections
More Info
Show full item record