Evaluation of LMP-420: A Novel, Nontoxic Drug with Anti-Inflammatory Properties and Therapeutic Potential for CLL 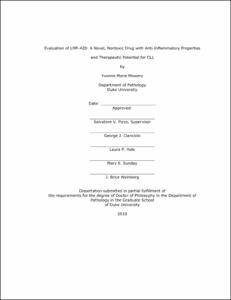 B-cell chronic lymphocytic leukemia (CLL) is the most common leukemia in the Western world. Although treatment of this disease has advanced considerably over the past decade, CLL remains incurable with current chemotherapeutics. In addition, available drug regimens for CLL are associated with frequent cytopenia-related complications, such as infection and fatigue. Thus, the major challenge in CLL treatment today is the need for alternative therapeutics with decreased toxicity and improved efficacy for disease refractory to currently available drugs.

CLL is characterized by slow accumulation of malignant cells, which are supported in the microenvironment by cell-cell interactions and soluble cytokines such as tumor necrosis factor (TNF). We evaluated the effect of the small molecule TNF inhibitor LMP-420 on primary CLL cells. LMP-420 exhibited cytotoxic activity against these cells in the MTS assay, with similar potency to the front-line CLL drug fludarabine. LMP-420 induced time- and dose-dependent apoptosis in CLL cells, as demonstrated by annexin V staining, caspase activation, and DNA fragmentation. These changes were associated with decreased expression of the anti-apoptotic proteins Mcl-1, Bcl-xL, Bcl-2, and XIAP. CLL cells from patients with poor prognostic indicators exhibited LMP-420 sensitivity equal to that for cells from patients with favorable characteristics. In addition, LMP-420 potentiated the cytotoxic effect of fludarabine and inhibited in vitro proliferation of CLL cells. In contrast to other CLL therapeutics, LMP-420 exhibited minimal effects on normal peripheral blood mononuclear cell viability, mitogen-stimulated B- and T-cell proliferation, and hematopoietic colony formation. Our data suggest that LMP-420 may be a useful treatment for CLL with negligible hematologic toxicities.

The effect profile of this compound in normal immune cells and the microarray studies in CLL cells indicate that the mechanism of action of LMP-420 likely involves modulation of the NF-kB pathway. Our initial studies demonstrate moderate but significant inhibitory activity against p65, a key member of the NF-kB transcription factor family. Research is ongoing to gain a better understanding of the specific cytotoxicity of LMP-420 for CLL cells and to elucidate other components of its mechanism of action. Regardless of the ultimate mechanistic findings with LMP-420, our studies support this molecule as a promising new CLL therapeutic that warrants further preclinical evaluation.