Sovereignty, Law, and Capital in the Age of Globalization 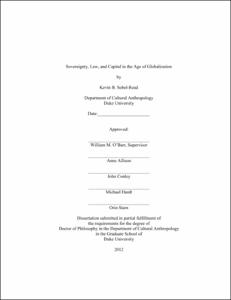 This dissertation offers a comprehensive model of contemporary nation-state sovereignty. To do so, it examines the mutually constitutive relationship between sovereignty and present-day globalization as well as the role of law and capital in creating, maintaining, and driving that relationship.

The scholarly treatment of nation-state sovereignty has been inadequate for several reasons. Older theories of sovereignty could not have foreseen the unprecedented technological advances that underlie our current system and therefore do not sufficiently explain it. More recent theories of sovereignty, in turn, tend to be too narrowly focused, such that a given model of sovereignty often only applies to that particular condition. Furthermore, the academic literatures on sovereignty and nationalism, while occasionally referencing each other, have failed to recognize that the two phenomena are parts of the same whole and therefore must be more fully integrated.

This dissertation argues that a comprehensive model of contemporary nation-state sovereignty must include two symbiotic elements. The first, referred to here as <italic>emotional sovereignty</italic>, involves subjective relationships with the state. As such, the substance of this element is unique for each group. The second element is a <italic>functional/instrumental</italic> element. It addresses ways that the sovereignty serves as an interface-mechanism with other sovereignties, like compatible nozzles attaching and linking variously-sized hoses. It likewise explains how sovereignty functions as a value-maximization mechanism. In short, a sovereignty must control its relationships with others in order to accumulate as much capital as possible in order to protect and perpetuate aspects of the domestic culture that are deemed most valuable. This <italic>functional/instrumental</italic> element, while used in distinct ways by different groups, is largely identical in form among all states.

From these multiple angles it becomes evident that nation-state sovereignty is not one single power but instead a set of powers, such that each power entails a strategic option that can be negotiated, delegated, mortgaged or surrendered. Nation-state sovereignty is therefore rendered meaningful only in connection with other nation-state sovereignties; in the contemporary situation, this means globalization. Sovereignty is, after all, an <italic>ad hoc</italic> solution to a particular set of historically and contextually emerging dilemmas; as the dilemmas have continued to change, so have the solutions. And so although people, goods, and ideas have always flowed across borders, whether geographic or cultural, the speed, nature, and extent of all such movement in the contemporary age is unprecedented. Today, all sovereignties - across the globe - are connected in diverse and manifold ways. This dissertation therefore provides a model of globalization that goes beyond the simple movement of people, goods, capital, and ideas to explain the conceptual transformations that have made today's globalization possible; the processes that drive it; and the role of the nation-state, and in particular nation-state sovereignty, as a necessary component of globalization itself.

The dissertation integrates these theories of sovereignty and globalization to show how the connections created by systems of nation-state law serve as the framework for many of the core processes of globalization, while flows of capital within and enabled by that framework fuel those processes. It shows that there are at least three important aspects of this relationship between sovereignty, globalization, law and capital: First, because of the connections of law, capital, and labor, <underline>every</underline> state is implicated in the production of <underline>every good</underline>, a phenomenon here referred to as <italic>co-production</italic>. Together with the <italic>co-consumption</italic> of those goods, <italic>co-production</italic> is the driving force behind globalization; as such, one can likewise say that nation-states <italic>co-produce</italic> globalization itself through the legal regulation of the movement of capital and individuals. Second, nation-states remain the central structural machinery of globalization. Third, globalization is not uniform. To be sure, the effects of globalization have transformed every culture on the planet and capitalism has been the vehicle for doing so. But just as not all cultures are the same, all capitalisms are not the same either. No model of sovereignty and globalization is therefore complete without a mechanism for accounting for differences in culture and capitalism.

The research that is the foundation for this dissertation was undertaken primarily in the South Pacific region, focusing on Cook Islanders in the Cook Islands, New Zealand, and Australia. Methods included participant observation, legal and documentary research, as well as informal and semi-structured interviews.