Neurobiology of Learning and Valuation 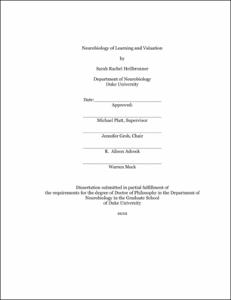 An animal's ability to make adaptive choices is key to its fitness. Thus, the process of determining options, making a decision, evaluating outcomes, and learning from those outcomes to adjust future behavior is a central function of our nervous system. Determining the neural mechanisms of these cognitive processes is a crucial goal. One brain region, the posterior cingulate cortex (CGp), a central hub within the default mode network, is prominently dysregulated in Alzheimer's Disease and schizophrenia. Despite its clinical importance, the posterior cingulate cortex remains an enigmatic nexus of attention, memory, and motivation, all pointing to a role in decision-making. This dissertation is concerned with the role of this brain region in the learning and valuation processes involved in making adaptive choices. Specifically, I used rhesus macaques (Macaca mulatta) to examine the neural activity in posterior cingulate associated with specific learning and valuation -related variables. In the first experiment, I showed that posterior cingulate neurons track decision salience--the degree to which an option differs from a standard--but not the subjective value of a decision. To do this, I recorded the spiking activity of CGp neurons in monkeys choosing between options varying in reward-related risk, delay to reward, and social outcomes, each of which varied in level of decision salience. Firing rates were higher when monkeys chose the risky option, consistent with their risk-seeking preferences, but were also higher when monkeys chose the delayed and social options, contradicting their preferences. Thus, across decision contexts, neuronal activity was uncorrelated with how much monkeys valued a given option, as inferred from choice. Instead, neuronal activity signaled the deviation of the chosen option from the standard, independently of how it differed. The observed decision salience signals suggest a role for CGp in the flexible allocation of neural resources to motivationally significant information, akin to the role of attention in selective processing of sensory inputs. This pointed to a role for CGp in learning rather than subjective value signaling, and the second set of experiments aimed to test the role of CGp in associative learning. I recorded from single CGp neurons in monkeys performing a simple conditional motor association task while varying stimulus familiarity and motivation. CGp neurons responded phasically following commission of errors, and this error signal was modulated by motivation and stimulus novelty. Moreover, slow variations in firing rates tracked variations in learning rate over the course of sessions. Silencing these signals with muscimol impaired learning in low motivational states but spared learning in high motivational states, and spared recall of familiar associations as well. These findings endorse a role for CGp in performance and environment monitoring to regulate learning rate. Collectively, these experiments reshape our understanding of the role of posterior cingulate cortex in cognition, integrate default mode and value-based theories of CGp function, and provide a potential foundation for a circuit-level explication of Alzheimer's Disease and schizophrenia.