The Limits of Tradition: Competing Logics of Authenticity in South Asian Islam 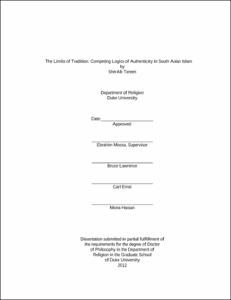 This dissertation is a critical exploration of certain authoritative discursive traditions on the limits of Islam in 19th century North India. It investigates specific moments when prominent Indian Muslim scholars articulated and contested the boundaries of what should and should not count as Islam. This study does not provide a chronological history of Islam in colonial India or that of Indian Muslim reform. Rather, it examines minute conjunctures of native debates and polemics in which the question of what knowledges, beliefs, and practices should constitute Islam was authoritatively contested. Taking 19th century Indian Muslim identity as its object of inquiry, it interrogates how the limits of identity and difference, the normative and the heretical, were battled out in centrally visible ways.

The set of illustrations that form the focus of this dissertation come from an ongoing polemic that erupted among some members of the Muslim intellectual elite in colonial India. At the heart of this polemic was the question of how one should understand the relationship between divine sovereignty, prophetic authority, and the limits of normative practice in everyday life. The rival protagonists of this polemic responded to this question in dramatically contrasting ways. One the one hand was a group of scholars whose conception of tradition pivoted on establishing the exceptionality of divine sovereignty. In order to achieve this task, they articulated an imaginary of Prophet Muhammad that emphasized his humanity and his subservience to the sovereign divine.

They argued that divine sovereignty was inseparable from the authority of the Prophet as the most charismatic and authorial being. In their view, divine and prophetic exceptionality mutually reinforced each other. Moreover, undermining the distinguished status of the Prophet by projecting him as a mere human who also happened to be a recipient of divine revelation represented anathema. As a corollary, these scholars vigorously defended rituals and everyday practices that served as a means to honor the Prophet's memory and charisma. This counter reformist movement was spearheaded by the influential Indian Muslim thinker Ahmad Razâ Khân (d.1921). He was the founder of the Barelvî School, another ideological group that flourished in late 19th century North India.

This dissertation describes these rival narratives of tradition and reform in South Asian Islam by focusing on three pivotal questions of doctrinal disagreement: 1) the limits of prophetic intercession (shafâ`at), 2) the limits of heretical innovation (bid`a), and 3) the limits of the Prophet's knowledge of the unknown (`ilm al-ghayb). It argues that these intra-Muslim contestations were animated by competing political theologies each of which generated discrete and competing imaginaries of law and boundaries of ritual practice.