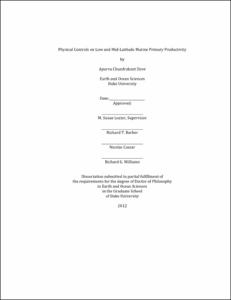 Strengthened stratification of the upper ocean, associated with either anthropogenic warming trends or natural climate oscillations, is generally expected to inhibit marine primary productivity at low and mid latitudes, based on the supposition that increased water column stability will decrease vertical mixing and consequently the upward entrainment of deep nutrients into the euphotic zone. Herein, we examine the local stratification control of productivity over the subtropical and equatorial Pacific by directly comparing a wide range of contemporaneous metrics, drawn from the modern observational record, for interannual stratification and productivity variability. We find no correlation between the two in the subtropical North Pacific. In the equatorial Pacific we do observe a correlation, but find no evidence of a strong causal connection between the two- instead, our analysis suggest that both biomass and stratification in this region are impacted by changes in the westward transport, via surface currents, of relatively cold, nutrient-rich waters that have been upwelled in the eastern Equatorial Pacific. The importance of horizontal nutrient supply is further evidenced by an analysis of seasonal variability in the subtropical North Atlantic, where the annual contraction and expansion of the oligotrophic region appears to be strongly influenced by the waxing and waning, respectively, of lateral nutrient transfers from neighboring, nutrient rich waters of the subpolar gyre and the West African upwelling zone.