The Role of Vision in Sexual Signaling in the Blue Crab 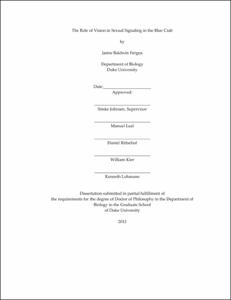 The dissertation work discussed here focuses on the behavioral and physiological aspects of visual sexual signaling in the blue crab, <italic>Callinectes sapidus</italic>. The blue crab has a pair of apposition compound eyes that are relatively acute (1.5 &deg; resolution) for an arthropod. The eyes have two photopigments sensitive to blue (&lambda;max = 440 nm) and green (&lambda; max=500 nm) light, allowing for simple color vision. Visual cues and signals are used during antagonistic and sexual communication and primarily involve claw-waving motions. A primary feature of the blue crab morphology is its sexually dimorphic claw coloration; males have blue and white claws and females have red claws. However, despite the potential for interesting color signaling, visual cues have typically been considered non-important, particularly in sexual communication where chemical cues have dominated blue crab signaling studies.

In a series of experiments designed to simultaneously test the role of visual cues in mating behavior and blue crab color vision, I tested males' responses to photographs of females with differently colored claws. I found that photographs of females elicited male courting behaviors. I also found that males preferred females with red claws over those with white or isoluminant (i.e. matched brightness) gray claws. The discrimination of red from isoluminant grey showed the use of color vision in male mate choice.

In natural populations, the claws of sexually mature females vary from light orange to deep red. To determine males' abilities discriminate between similar colors, I tested male color preferences for red against several shades of orange varying in brightness. Overall, males showed an innate preference for red-clawed females over those with variations of orange claws. However, in tests between red and orange shades similar in both brightness and hue, male blue crabs did not show a distinct preference, suggesting that males are either not able or not motivated to discriminate between these shades. Further, my results suggest that male blue crabs may use a mixture of chromatic and achromatic cues to discriminate between long-wavelength colors.

After confirming the use of color in mate choice, I focused on the role of claw color in intraspecific communication. To quantify claw coloration, I measured spectral reflectance of claws of a blue crab population in North Carolina. In both sexes, the color of the claw varied with reproductive maturity and may act as a cue of reproductive readiness. Additionally, there was individual variation in claw color which could indicate individual quality. I have modeled the appearance of claw coloration to the blue crab eye and found that these color differences are visible to the blue crab eye and potentially signal gender, reproductive readiness, and/or individual quality.

After investigating male mate choice, I began investigating visual aspects of female mating behavior. In the blue crab, like many crustaceans, courtship occurs during the female molting cycle and copulation takes place after the female has shed her exoskeleton. In crustaceans and other arthropods with compound eyes, the corneal lens of each facet is part of the exoskeleton and thus shed during molting. I used optomotor assays to evaluate the impact of molting on visual acuity (as measured by the minimum resolvable angle <italic> &alpha min</italic>) in the female blue crab. I found that visual acuity decreases substantially in the days prior to molting and is gradually recovered after molting. Prior to molting,<italic> &alphamin </italic>was 1.8 &deg;, a value approximating the best possible acuity in this species. In the 24 hours before molting, <italic> &alpha min</italic>increased to a median of 15.0 &deg; (N=12), an eight-fold drop in visual acuity. Six days after molting, <italic> &alpha min</italic>returned to the pre-molting value. Micrographs of <italic>C. sapidus </italic> eyes showed that a gap between the corneal lens and the crystalline cone appeared approximately five days prior to shedding and increased in width the process progressed. This separation was likely responsible for the loss of visual acuity observed in behavioral tests. Since mating is limited to the female's pubertal molt, a reduction in acuity during this time may have an effect on the sensory cues used in female mate choice. These results may be broadly applicable to all arthropods that molt and have particular importance for crustaceans that molt multiple times in their lifetime or have mating cycles paired with molting.