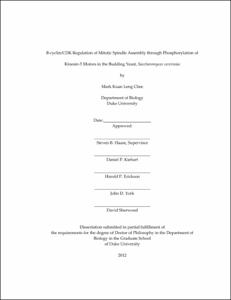 Although it has been known for many years that B-cyclin/CDK complexes regulate the assembly of the mitotic spindle and entry into mitosis, the full complement of relevant CDK targets has not been identified. It has previously been shown in a variety of model systems that B-type cyclin/CDK complexes, kinesin-5 motors, and the SCF<super>Cdc4</super> ubiquitin ligase are required for the separation of spindle poles and assembly of a bipolar spindle. It has been suggested that in the budding yeast,<italic> Saccharomyces cerevisiae</italic>, B-type cyclin/CDK (Clb/Cdc28) complexes promote spindle pole separation by inhibiting the degradation of the kinesins-5 Kip1 and Cin8 by the anaphase-promoting complex (APC<super>Cdh1</super>). I have determined, however, that the Kip1 and Cin8 proteins are actually present at wild-type levels in yeast in the absence of Clb/Cdc28 kinase activity. Here, I show that Kip1 and Cin8 are in vitro targets of Clb2/Cdc28, and that the mutation of conserved CDK phosphorylation sites on Kip1 inhibits spindle pole separation without affecting the protein's <italic>in vivo</italic> localization or abundance. Mass spectrometry analysis confirms that two CDK sites in the tail domain of Kip1 are phosphorylated in vivo. In addition, I have determined that Sic1, a Clb/Cdc28-specific inhibitor, is the SCF<super>Cdc4</super> target that inhibits spindle pole separation in cells lacking functional Cdc4. Based on these findings, I propose that Clb/Cdc28 drives spindle pole separation by direct phosphorylation of kinesin-5 motors.

In addition to the positive regulation of kinesin-5 function in spindle assembly, I have also found evidence that suggests CDK phosphorylation of kinesin-5 motors at different sites negatively regulates kinesin-5 activity to prevent premature spindle pole separation. I have also begun to characterize a novel putative role for the kinesins-5 in mitochondrial genome inheritance in <italic>S. cerevisiae</italic> that may also be regulated by CDK phosphorylation.

In the course of my dissertation research, I encountered problems with several established molecular biology tools used by yeast researchers that I have tried to address. I have constructed a set of 42 plasmid shuttle vectors based on the widely used pRS series for use in <italic>S. cerevisiae</italic> that can be propagated in the bacterium Escherichia coli. This set of pRSII plasmids includes new shuttle vectors that can be used with histidine and adenine auxotrophic laboratory yeast strains carrying mutations in the genes <italic>HIS2</italic> and <italic>ADE1</italic>, respectively. My new pRSII plasmids also include updated versions of commonly used pRS plasmids from which common restriction sites that occur within their yeast-selectable biosynthetic marker genes have been removed in order to increase the availability of unique restriction sites within their polylinker regions. Hence, my pRSII plasmids are a complete set of integrating, centromere and 2&#61549; episomal plasmids with the biosynthetic marker genes <italic>ADE2</italic>, <italic>HIS3</italic>, <italic>TRP1</italic>, <italic>LEU2</italic>, <italic>URA3</italic>, <italic>HIS2</italic> and <italic>ADE1</italic> and a standardized selection of at least 16 unique restriction sites in their polylinkers. Additionally, I have expanded the range of drug selection options that can be used for PCR-mediated homologous replacement using pRS plasmid templates by replacing the G418-resistance kanMX4 cassette of pRS400 with MX4 cassettes encoding resistance to phleomycin, hygromycin B, nourseothricin and bialaphos. Finally, in the process of generating the new plasmids, I have determined several errors in existing publicly available sequences for several commonly used yeast plasmids. Using updated plasmid sequences, I constructed pRS plasmid backbones with a unique restriction site for inserting new markers in order to facilitate future expansion of the pRS/pRSII series.