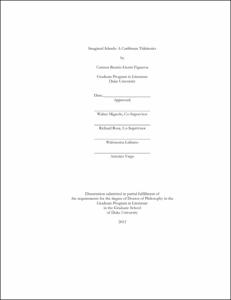 <italic>Imagined Islands: A Caribbean Tidalectics</italic> confronts islands -at once as a problem, a concept, and a historical and mythical fact and product- by generating a tidalectical encounter between some of the ways in which islands have been imagined and used from without, primarily in the interest of the advancement of western capitalist coloniality, and from within, as can be gathered from Caribbean literatures. The perspective from without, predominantly based on negation, is explored in Section 1 using examples of islands in the Mediterranean, the Pacific, and the Atlantic, as well as a few canonical texts in various academic discourses. Section 2 discusses the perspective from within, an affirmative and creative counter-imagination on/of islands. Emerging from literary work by Derek Walcott, Edgardo Rodríguez Juliá, Édouard Glissant, and Alejo Carpentier, the chapters in Section 2 are organized around three key concepts associated with insularity -tropical light, the coast, and the sea/ocean- and the ways in which they force a rearrangement of enduring philosophical concepts: respectively, vision and sense perception, time and space, and history.<br><p> <italic>Imagined Islands'</italic> Introduction establishes, (1) the stakes of a project undertaken from an immanent perspective set in the Caribbean; (2) the method, inspired chiefly by Kamau Brathwaite's concept of <italic>tidalectics</italic>; (3) the epistemological problems posed by islands; (4) an argument for a different understanding of history, imagination, and myth inspired by Caribbean texts; and, (5) an overview of the academic debates in which <italic>Imagined Islands</italic> might make a significant contribution. The first section, "Islands from Without," comprising Chapter 1, provides an account of a few uses and imaginations of islands by capitalist coloniality as they manifest themselves both in the historical and the mythical imaginary realms. I focus on five uses and imaginations of islands (entrepôt island, sugar island, strategic island, paradise island, and laboratory island), with specific examples from the Mediterranean, the Pacific, and the Atlantic, and from five canonical texts ascribed to different disciplinary discourses: Plato's "Atlantis," Thomas More's <italic>Utopia</italic>, Daniel Defoe's <italic>Robinson Crusoe</italic>, Charles Darwin's <italic>The Origin of the Species</italic>, and Margaret Mead's <italic>Coming of Age in Samoa</italic>. I argue, on the one hand, that a dominant idea of the island based on negation (lack, dependency, boundedness, isolation, smallness, remoteness, among other characteristics) has coalesced in the expansionist and exploitative interests of capitalist coloniality, despite the fundamental promiscuity of the concept of "island." On the other hand, I find in the analyzed examples, especially in those of the mythical imaginary, residues in flight that remain open for creative reappropriation.<br><p> <italic>Imagined Islands'</italic> second section, "Islands from Within," encompassing Chapters 2 through 5, relocates the discussion within the Caribbean in order to argue that some of the region's literatures have produced a counter-imagination concerning insularity. This counter-imagination, resulting from an immanent and affirmative engagement with Caribbean islands, amounts to a way of thinking about and living the region and its possibilities in terms other than those of the dominant idea of the island. Each chapter opens with a historical and conceptual discussion of the ways in which light (Chapter 2), the coast (Chapters 3 and 4), and the sea/ocean (Chapter 5) have been imagined and deployed by capitalist coloniality, before turning to Caribbean literary texts as instances of a re-conceptualization of the aforementioned insular features and their concomitant rearrangement of apparently familiar philosophical concepts. Chapter 2 focuses on tropical light, vision, sense perception, Walcott's book-length poem <italic>Tiepolo's Hound</italic>, and Rodríguez Juliá's novel <italic>El espíritu de la luz</italic>. Chapter 3 turns to the insular coast, time, space, and the novels <italic>El siglo de las luces</italic> by Carpentier and <italic>The Fourth Century</italic> by Glissant. Chapter 5 goes out to sea and history with the help of Rodríguez Juliá's chronicles "El cruce de la Bahía de Guánica y otras ternuras de la Medianía" and "Para llegar a Isla Verde," as well as of sections from Glissant's <italic>Poetics of Relation</italic> and some of his poems from <italic>The Restless Earth</italic>. Finally, <italic>Imagined Islands'</italic> Coda points to some of the ripples this project produces for future study, and defends the urgent need to "live differently" the Caribbean archipelagoes.