Networks of Knowledge: Ethnology and Civilization in French North and West Africa, 1844-1961 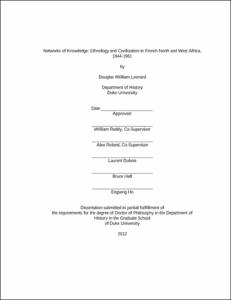 <p>The second French colonial empire (1830-1962) challenged soldiers, scholars, and administrators to understand societies radically different from their own so as to govern them better. Overlooking the contributions of many of these colonial officials, most historians have located the genesis of the French social theory used to understand these differences in the hallowed halls of Parisian universities and research institutes. This dissertation instead argues that colonial experience and study drove metropolitan theory. Through a contextualized examination of the published and unpublished writings and correspondence of key thinkers who bridged the notional metropolitan-colonial divide, this dissertation reveals intellectual networks that produced knowledge of societies in North and West Africa and contemplated the nature of colonial rule. From General Louis Faidherbe in the 1840s to politician Jacques Soustelle and sociologist Pierre Bourdieu in the 1950s, a succession of soldiers and administrators engaged in dialogue with their symbiotic colonial sources to translate indigenous ideas for a metropolitan audience and humanize French rule in Africa. Developing ideas in part from a reading of native African written and oral sources, these particular colonial thinkers conceived of social structure and race in civilizational terms, placing peoples along a temporally-anchored developmental continuum that promised advancement along a unique pathway if nurtured by a properly adapted program of Western intervention. This perspective differed significantly from the theories proposed by social scientists such as Emile Durkheim, who described "primitivity" as a stage in a unilinear process of social evolution. French African political and social structures incorporated elements of this intellectual direction by the mid-twentieth century, culminating in the attempt by Jacques Soustelle to govern Algeria with the assistance of ethnological institutions. At the same time, Pierre Bourdieu built on French ethnological ideas in an empirically grounded and personally contingent alternative to the dominant structuralist sociological and anthropological perspective in France.

<p>Approached as an interdisciplinary study, this dissertation considers colonial knowledge from a number of different angles. First, it is a history of French African ethnology viewed through a biographical and microhistorical lens. Thus, it reintroduces the variance in the methods and interpretations employed by individual scholars and administrators that was a very real part of both scientific investigation and colonial rule. Race, civilization, and progress were not absolutes; definitions and sometimes applications of these terms varied according to local and personal socio-cultural context. This study also considers the evolution of French social theory from a novel perspective, that of the amateur fieldworker in the colonies. Far from passive recipients of metropolitan thought, these men (and sometimes women) actively shaped metropolitan ideas on basic social structure and interaction as they emerged. In the French science de l'homme, intellectual innovation came not always from academics in stuffy rooms, but instead from direct interaction and dialogue with the subjects of study themselves.