Sortases: Keystones to Virulence and Targets for Anti-Infective Therapy 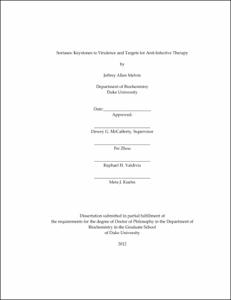 Gram-positive pathogens, such as <italic>Streptococcus pyogenes</italic> and <italic>Staphylococcus aureus</italic>, are etiological agents of a large array of human diseases. Unfortunately, our ability to treat these infections is increasingly limited due to the development of bacterial resistance to many existing therapies. Thus, novel targets for antimicrobial development are urgently needed. An attractive candidate for a new class of anti-virulence chemotherapeutics is the sortase class of enzymes. Sortases are extracellular transpeptidases unique to Gram-positive bacteria. Their function is to covalently attach secreted virulence factors to the bacterial cell wall. Deletion or inhibition of sortases results in severe attenuation of bacteria for infection. In order to develop novel effective antimicrobial agents, a robust understanding of the biological and chemical mechanisms of the target are required. To this end, this dissertation endeavors to further illuminate the biochemical mechanism of sortase enzymes and to extend the current knowledge of the roles of sortases and their substrates during infection.

Initial steps have also been taken to characterize <italic>S. pyogenes</italic> sortase C (SrtC). SrtC enzymes are unique in that they covalently polymerize secreted proteins, rather than attach them to peptidoglycan. Full length and truncation mutant constructs of SrtC and its substrate, T3, and peptide substrate mimics have been produced in soluble form for use in kinetic assays. Additionally, initial crystallization conditions have been identified for <italic>S. pyogenes</italic> SrtC towards the goal of three-dimensional structure determination. A homology model of the structure has also been produced, displaying many of the general features observed for other sortase enzymes.

Previous studies suggest that SrtA activity is required for <italic>S. aureus</italic> to survive phagocytosis by a macrophage. The production of reactive oxygen species by professional phagocytes could lead to inhibition of SrtA via oxidation of a conserved nucleophilic cysteine residue in the active site. Through determination of inhibition kinetics, identification of oxidative modifications, reduction potential measurements, and analyses of SrtA in vivo activity in the presence of reactive oxygen species, it has been demonstrated that <italic>S. aureus</italic> SrtA is resistant to oxidative inhibition. These findings support SrtA activity inside the phagolysosome of a professional phagocyte and likely contribute to the ability of <italic>S. aureus</italic> to evade the innate immune system.

The roles of sortases and their substrates during <italic>S. aureus</italic> survival inside professional phagocytes have not been thoroughly investigated. Through analysis of the regulation of these surface proteins under phagolysosomal conditions and macrophage phagocytosis survival assays, initial characterization of the functions of sortases and their substrates in this environment has been completed. Previous studies have suggested a role for SrtA and its substrate, Protein A, and these genes and two other sortase-substrates were upregulated in response to phagolysosomal conditions. However, neither sortases nor their substrates demonstrated a direct function in phagocytosis survival. These findings imply a complex interplay between <italic>S. aureus</italic> and professional phagocytes. Further studies are necessary to delineate the direct activities of surface anchored proteins during phagocytosis of <italic>S. aureus</italic> by professional phagocytes.