Food, Eating, and the Anxiety of Belonging in Seventeenth-Century Spanish Literature and Art 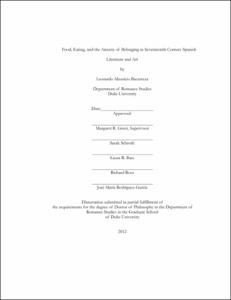 In my dissertation I propose that the detailed representation of food and eating in seventeenth-century Spanish art and literature has a double purpose: to reaffirm a state of well-being in Spain, and to show a critical position, because artistic creations emphasize those subjects who, because of social status or cultural background, do not share such benefits. This double purpose explains why literature and painting stress the distance between foodstuffs and consumers, turning food into a commodity that cannot be consumed directly, but through its representation and value. Cervantes's writing is invoked because, especially in Don Quixote, readers can see how the protagonist rejects food for the sake of achieving higher chivalric values, while his companion, Sancho Panza, faces the opposite problem: having food at hand and not being able to enjoy it, especially when he achieves his dream of ruling an island. The principle is similar in genre painting: food is consumed out of the picture in still lifes, or out of the hands of the represented characters in kitchen scenes, for they are depicted cooking for others. Because of the distance between product and consumer, foodstuffs indicate how precedence and authority are established and reproduced in society. In artistic representations, these apparently unchangeable principles are mimicked by the lower classes and used to establish parallel systems of authority such as the guild of thieves who are presented around a table in a scene of Cervantes's exemplary novel "Rinconete and Cortadillo." Another problem to which the representation of foodstuffs responds is the inclusion of New Christians from different origins. In a counterpoint with the scenes in which precedence is discussed, and frequently through similar aesthetic structures, Cervantes and his contemporaries create scenes where the Christian principle of sharing food and drinking wine together is the model of inclusion that dissolves distinctions between Old and New Christians. I argue that this alternative project of community can be related to the expulsion of the Moriscos from Spain, decreed in 1609, because this event made many subjects interrogate themselves about their own status and inclusion. An artistic model of response to these interrogations about belonging is the figure of the roadside meal, which appears as the main motif of a meal shared by Sancho and a self-proclaimed Christian Morisco in the second part of Don Quixote, and reappears in a painting by Diego de Velázquez, which presents in the foreground a dark-skinned servant working in a kitchen, and in the background another roadside meal: the Supper at Emmaus. Both in literature and painting the way of preparing meals, eating and drinking creates ties, establishes a different principle of belonging, and promotes unity. In this alternative model characters are recognized as subjects of the kingdom as long as they eat and drink the way Christians do. Even though this model still leads to a single Christian kingdom, paintings and writings suggest a different form of cohesion, in which subjects are considered equal and recognize each other because of their participation.