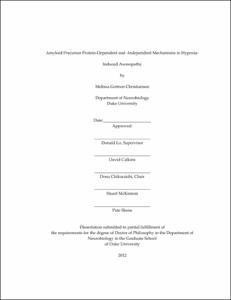 Hypoxia is a profound stressor of the central nervous system implicated in numerous neurodegenerative diseases. While it is increasingly evident that the early effects of hypoxia cause impairment at the level of the axon, the precise mechanisms through which hypoxia compromises axonal structure and function remain unclear. However, links between hypoxia-induced axonopathic disease and the amyloid cascade, as well as the upregulation of amyloid precursor protein (APP) and amyloid beta (A&beta;) by hypoxic stress, give rise to the hypothesis that proteolytic cleavage of APP into A&beta; may be specifically responsible for axonopathy under conditions of hypoxia.