From "Education Beyond Utility" to Utility for Legitimacy: Contemporary Opposition to Article 9 Revision in the Context of the Soka Gakkai's Historical Development 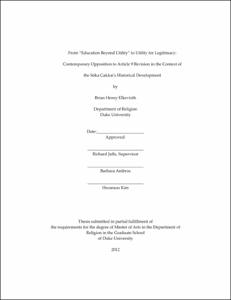 This study examines the contemporary debate over proposals to revise the Japanese "Peace Constitution" from the perspective of its meaning to the Soka Gakkai. To the present, the LDP's chief target for revision has been the war- and military renunciation clauses of Article 9. In connection with its argument that Article 9 undermines Japan's national security, the LDP has made the specification of collective self-defense a prime focus of its efforts to produce a draft for a new Japanese Constitution. During the last decade the LDP's best chance to date to achieve this goal arose by the convergence of a number of domestic and international circumstances. However, in the end, the LDP was prevented from realizing its revision aims on account of opposition from its coalition partner, the Komeito, which itself sought to preserve Article 9 at the behest of its core constituent, the Soka Gakkai. After having been excommunicated from the Nichiren Shoshu in 1991 Gakkai leaders prioritized activism on behalf of Article 9 as the pivotal component of an innovative hermeneutical strategy devised to evince that the movement had retained its legitimacy through the split. By contextualizing this hermeneutical strategy within the Soka Gakkai's overall historical development and analyzing the streams of activity put into motion thereby until their eventual intersection (via the Komeito) with the LDP's reform agenda, it has been revealed that the chance to impact the Constitutional revision process has served a critical function in enabling the Soka Gakkai to demonstrate its legitimacy as a wholly independent lay religious movement, and thus to remain a viable factor within today's Japanese religious landscape.