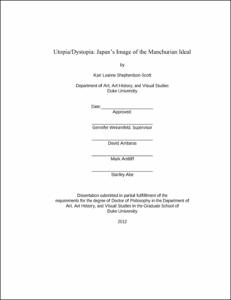 This project focuses on the visual culture that emerged from Japan's relationship with Manchuria during the Manchukuo period (1932-1945). It was during this time that Japanese official and popular interest in the region reached its peak. Fueling the Japanese attraction and investment in this region were numerous romanticized images of Manchuria's bounty and space, issued to bolster enthusiasm for Japanese occupation and development of the region. I examine the Japanese visual production of a utopian Manchuria during the 1930s and early 1940s through a variety of interrelated media and spatial constructions: graphic magazines, photography, exhibition spaces, and urban planning. Through this analysis, I address how Japanese political, military, and economic state institutions cultivated the image of Manchukuo as an ideal, multiethnic state and a "paradise" (rakudo) for settlement in order to generate domestic support and to legitimize occupation on the world stage. As there were many different colonial offices with different goals, there was no homogenous vision of the Manchurian ideal. In fact, tensions often emerged between offices as each attempted to garner support for its own respective mission on the continent. I examine these tensions and critique the strategic intersection of propaganda campaigns, artistic goals and personal fantasies of a distant, exotic frontier. In the process, this project explores how the idea of Manchuria became a panacea for a variety of economic and social problems plaguing Japan at both a national and individual level.