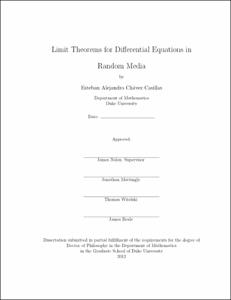 Problems in stochastic homogenization theory typically deal with approximating differential operators with rapidly oscillatory random coefficients by operators with homogenized deterministic coefficients. Even though the convergence of these operators in multiple scales is well-studied in the existing literature in the form of a Law of Large Numbers, very little is known about their rate of convergence or their large deviations.

In the first part of this thesis, we we establish analytic results for the Gaussian correction in homogenization of an elliptic differential equation with random diffusion in randomly layered media. We also derive a Central Limit Theorem for a diffusion in a weakly random media.

In the second part of this thesis devise a technique for obtaining large deviation results for homogenization problems in random media. We consider the special cases of an elliptic equation with random potential, the random diffusion problem in randomly layered media and a reaction-diffusion equation with highly oscillatory reaction term.