Haunted Paradise: Remembering and Forgetting Among Ascetics of the Egyptian Desert 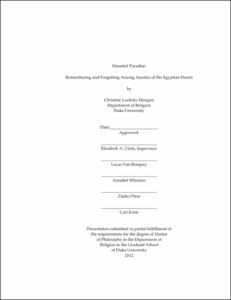 My dissertation explores how constructions of memory, space, and violence intersected in the history of early Christianity. It analyzes the crucial roles of memory and space/place in the formation, practice, and understanding of late ancient asceticism in Egypt's northwestern desert (Scetis, Kellia, Nitria, and Pherme). After a "barbarian" raid of Scetis in the early fifth century supposedly exiled Christian monks from the desert, Egypt came to be remembered as the birthplace of ascetic practice. Interpreting texts (in Coptic, Latin, Greek, Syriac, and Classical Arabic) and archaeological remains associated with the northwestern Egyptian desert, my dissertation investigates ascetic ideas about the relationship between memories and places: memory-acts as preserved in the liturgical and literary texts, memory in the liturgical contexts of church and cell, the ascetic use of Scriptural interpretation to thwart "worldly" recollection caused by demonic incitement to abandon the desert, and remembrance of a past moment through the perceived loss of Scetis. Wedding textual evidence, material culture, and theoretical insights, I highlight how the memorialization of a particular moment in the history of early Christian asceticism overshadowed other, contemporary late ancient asceticisms. My dissertation produces a new understanding of the negotiations between memory and space, often a process of contestation, and sheds new light not only on how violence was performed in late antiquity, but also on modern struggles over memorialized locales.