A Computational Synthesis of Genes, Behavior, and Evolution Provides Insights into the Molecular Basis of Vocal Learning 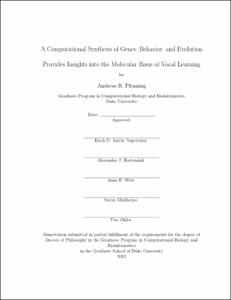 Vocal learning is the ability modify vocal output based on auditory input and is the basis of human speech acquisition. It is shared by few distantly related bird and mammal orders, and is thus very likely to be an example of convergent evolution, having evolved independently in multiple lineages. This complex behavior is presumed to require networks of regulated genes to develop the necessary neural circuits for learning and maintaining vocalizations. Deciphering these networks has been limited by the lack of high throughput genomic tools in vocal learning avian species and the lack of a solid computational framework to understand the relationship between gene expression and behavior. This dissertation provides new insights into the evolution and mechanisms of vocal learning by taking a top-down, systems biology approach to understanding gene expression regulation across avian and mammalian species. First, I worked with colleagues to develop a zebra finch Agilent oligonucleotide microarray, including developing programs for more accurate annotation of oligonucleotides and genes. I then used these arrays and tools in multiple collaborative, but related projects, to measure transcriptome expression data in vocal learning and non-learning avian species, under a number of behavioral paradigms, with a focus on song production. To make sense of the avian microarray data, I compiled microarray data from other sources, including expression analyses across over 900 human brain regions generated by Allen Brain Institute. To compare these data sets, I developed and performed a variety of computational analyses including clustering, linear models, gene set enrichment analysis, motif discovery, and phylogenetic inference, providing a novel framework to study the gene regulatory networks associated with a complex behavior. Using the developed framework, we are able to better understand vocal learning at different levels: how the brain regions for vocal learning evolved and how those brain regions function during the production of learned vocalizations. At the evolutionary level, we identified genes with unique expression patterns in the brains of vocal learning birds and humans. Interesting candidates include genes related to formation of neural connections, in particular the SLIT/ROBO axon guidance pathway. This algorithm also allowed us to identify the analogous regions that are a part of vocal learning circuit across species, providing the first quantitative evidence relating the human vocal learning circuit to the avian vocal learning circuit. With the avian song system verified as a model for human speech at the molecular level, we conducted an experiment to better understand what is happening in those brain regions during singing by profiling gene expression in a time course as birds are producing song. Surprisingly, an overwhelming majority of the gene expression identified was strongly enriched in a particular region. We also found a tight coupling between the behavioral function of a particular region and the gene expression pattern. To gain insight into the mechanisms of this gene regulation, we conducted a genomic scan of transcription factor binding sites in zebra finch. Many transcription factor binding sites were enriched in the promoters of genes with a particular temporal patterns, several of which had already been hypothesized to play a role in the neural system. Using this data set of gene expression profiles and transcription factor binding sites along with separate experiments conducted in mouse, we were able uncover evidence that the transcription factor CARF plays a role in neuron homeostasis. These results have broadened our understanding of the molecular basis of vocal learning at multiple levels. Overall, this dissertation outlines a novel way of approaching the study of the relationship between genes and behavior.