Assessing Neurocognitive Impairment in HIV-positive Patients: The Sensitivity and Specificity of the CogState Brief Battery 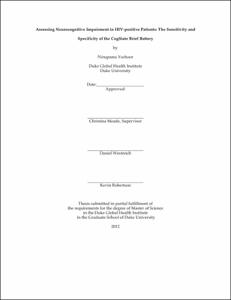 Objective: The prevalence of cognitive impairment in HIV-positive patients is estimated to be 39% in Uganda [1]. Despite the high prevalence of impairment, routine HIV management in Uganda does not include neuropsychological assessment. The objective of this study was to compare performance on the gold standard neuropsychological exam and on the CogState computerized exam. We hypothesized that there would be a high degree of correlation between performance on the two exams.

Methods: This cross-sectional survey was conducted from August to October 2011. Each participant completed the standard neuropsychological exam, which consisted of 10 tasks across 7 cognitive ability domains. Patients also completed CogState, which consisted of 4 tasks using playing cards. Performance for each exam was standardized using normative data from HIV seronegative controls to produce z-scores. The primary outcome measures were average z-scores of performance for each exam.

Results: Out of 181 patients tested, 130 (72%) were classified as impaired on the gold standard neuropsychological exam, while 104 (57%) were classified as impaired on CogState. The sensitivity of CogState compared to the gold standard was 65% (95% CI = 56% - 73%) and the specificity was 63% (95% CI = 48% - 73%). The Pearson's correlation of cumulative performance between the exams is 0.552, which is significant at the 0.01 level. Finally, those patients with normal cognition performed the best on CogState, while those with the most severe impairment performed the worst.

Conclusions: Our findings suggest that CogState is a feasible and useful tool to screen for and monitor impairment in HIV-positive patients, especially in resource-limited settings. Future studies are needed to examine how individual performance on CogState changes over time.