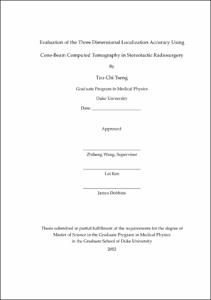 <bold>Purpose:</bold> Stereotactic Radiosurgery (SRS) indicates a single fraction, large prescription dose, and high dose gradient radiation treatment for intracranial lesions. The stereotactic immobilization and localization techniques assure the submillimeter accuracy which is required for precise target dose delivery and normal tissue sparing during the treatment. The invasive stereotactic frame-based localization system was the gold standard in SRS for many years based on its high reliability; however, the invasive nature has significant disadvantages in causing patient discomfort and increasing clinical burdens. Therefore, based on the development of on-line imaging techniques and the improvement of computer technology, the noninvasive frameless localization system combined with image-guided patient setup correction is currently widely applied in SRS treatments. This work was designed to compare the setup accuracy between the frame-based and frameless localization system. In addition, the localization and dosimetric accuracy of the treatment after cone beam computed tomography (CBCT) image-guided localization were also evaluated in this work.

<bold>Material and Method:</bold> At Duke University Radiation Oncology Department, SRS treatments are performed with Novalis TX system. Commonly, the invasive BrainLab Headring system is used for patients with trigeminal neuralgia; on the other hand, the non-invasive BrainLab U-frame system with thermoplastic mask immobilization is applied for the patient with other brain lesions. Both 2D kV images and CBCT images are acquired from the on-board imager (OBI) system for patient localization. The couch shift data from 288 patients with 394 brain lesions treated by single fraction SRS were collected to calculate the setup discrepancies between both frame-based and frameless stereotactic localizations. The systematic setup errors were represented by the mean discrepancies in each direction and the corresponding standard deviations were taken as the random errors in patient setup. In addition, the discrepancies in RMS were also calculated in three transitional directions as the magnitude of the setup errors. 19 patients with 20 brain lesions immobilized with the noninvasive BrainLab U-frame system and thermoplastic mask were selected to evaluate the localization and dosimetric accuracy of CBCT image-guided SRS by the BrainLab iPlan Phantom Mapping module. The contours of the PTV and critical organ were transferred directly from the planning CT and MR images to the CBCT images after image registrations. The distances between the CBCT isocenter coordinates and the PTV center coordinates after couch shifts applied were considered as the residual errors of image-guided setup correction. Moreover, the delivered dose distributions could be calculated and analyzed by copying the original treatment plans to the CBCT images and assigning the treatment isocenters on the CBCT images according to the couch shifts acquired after planning CT and CBCT image registrations. The CT electron density calibration curve used for original plans was also applied for the CBCT-based planning.

<bold>Conclusion:</bold> In this study, the invasive BrainLab Headring system demonstrated better localization accuracy than the non-invasive U-frame system. The image-guided system provided larger improvement to the U-frame system than the Headring system in minimizing systematic errors, random errors, and the discrepancies in RMS. In addition, the CBCT-based plans also showed a comparable dosimetric treatment quality relative to the original plans. Only the average PTV coverage in CBCT-based plans was considered poorer than the original plans and the differences was found statistical significant. This deviation may result from the residual discrepancies after image-guided patient localization. However, the treatment goal (100% of GTV covered by 100% prescription dose) can still be achieved by the margin expansions from GTV to PTV. Furthermore, in our work, the rotational image-guided corrections were not considered because of the phantom mapping module limitations. These rotational discrepancies may also cause the degradations in PTV coverage during treatment delivery especially for lesions with irregular shape. Therefore, the future work can be focused on designing a comprehensive evaluation method which can also take the rotation discrepancy corrections into consideration.