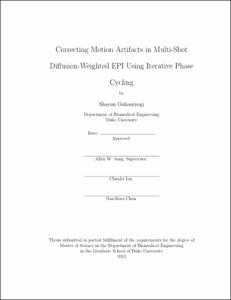 Diffusion-weighted MRI (DWI) is an essential tool in clinical applications such as detecting ischemic stroke, and in research applications studying neuronal connectivity in the brain. Diffusion-weighted imaging with multi-shot echo-planar acquisition (DWEPI) offers several advantages over single-shot EPI, including improved spatial resolution and reduced off-resonance and susceptibility artifacts. However a major limitation of multi-shot DWEPI is its sensitivity to patient motion during the application of diffusion gradients; the motion generates phase errors which vary from shot to shot, resulting in artifacts in the reconstructed image.

Most current methods for correcting motion-induced artifacts involve the use of navigator echoes to estimate the shot-to-shot phase errors. Accurate navigator information comes at the expense of increased scan times however, which is generally undesirable. The aim of this study is to therefore develop and demonstrate the use of an alternative phase estimation technique, iterative phase-cycling, as a new method to correct motion artifacts in DWI without the use of navigators. The developed method involves an iterative column by column estimation of phase errors in the aliased image and reconstruction of an artifact free image using the estimated errors.

In this study the technique was applied to correct artifacts in simulated images, hybrid-simulated images, and true four-shot DWEPI images. Accuracy of the phase-cycling method was evaluated by computing residual image errors and ghost-to-noise ratios after correction. The efficiency of phase-cycling was evaluated by recording computation times of the correction process. Multiple optimization techniques were developed and used in the experiments, and the accuracy/efficiency of these techniques were also assessed.

The study establishes the developed technique as a unique and effective method for correcting motion artifacts in DWEPI without the cost of increased scan times.