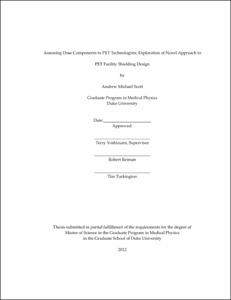 Purpose: (1) To verify the accuracy and linearity of the ThermoScientific Radeye G Personal Rate Meter with respect to exposure rate across the full dynamic range of the instrument. (2) Use a combination of empirical data and Monte Carlo methods to estimate dose distribution in a GE Discovery 690 PET/CT scanner room and adjacent hallway. (3) Quantify components of occupational dose to PET technologists.

Materials & Methods: (Project 1) The Radeye unit and a calibrated ion chamber were placed in the beam of a Cesium 137 calibrator. They were exposed from 46 &#956;R/hr to 1 R/hr with the pulse of each beam lasting for 90 seconds. The Radeye made 15 exposure rate measurements during each pulse. The ion chamber was read in the mid-point of each pulse's duration. (Project 2) Six Radeye units were placed at key points within the Discovery 690 scan room and two were placed in the adjacent hallway. 1600 exposure rate measurements were made over eleven hours during each day of operation. Data was collected for seven days. The total integrated data from the detectors inside the room was used to develop a Monte Carlo model of the room using FLUKA software. This model was then able to estimate the contribution from radiation escaping the scan room to the detectors in the hallway. (Project 3) Three PET technologists wore Radeye units while performing their daily tasks. The detectors recorded a mean exposure rate over each 25 second sampling period. The technologists were also asked to maintain a written log of all their interaction with radioactive material as well as their interactions with injected patients. Each day the Radeye unit produced a plot of radiation exposure with respect to time. Each interaction with radioactivity from the logs was highlighted on the plot and integrated to obtain the exposure received while performing that task.

Results: (Project 1) The Radeye deviated from the known value of exposure by up to 9.3% and deviated from the ion chamber measurement by up to 8.6% for exposure rates of 1 mR/hr and greater. The Radeye measured up to 29.6% higher than the known rate and up to 33.6% higher than the ion chamber measurement for exposure rates less than 1 mR/hr. The variance in the Radeye measurements decreased as exposure rate increased. The standard deviation of the Radeye measurements were less than 4% of their respective mean values for exposure rates less than 1 mR/hr. This value increased for lower exposure rates, up to 14% at 0.046 mR/hr. (Project 2) Mean daily exposures to five points in the PET/CT scan room were measured for CT and PET emissions separately. A Monte Carlo model of the scan room was created to model the distribution, including an initial approximation for the scanner gantry. The simulations showed that the virtual scanner should be thinner (i.e. less attenuating), especially for the 511KeV PET photons. (Project 3) The mean exposure received per dose draw and accompanying injection was 0.70±0.23mR for the 113 injections recorded over the course of the study. No correlation was observed between the dosage injected and the exposure received. The percent contributed to the total exposure by each category and participant was as follows. Technologist #1: 68% from Dose Draw, 6% from Patient Positioning, 4% from Patient Transport, 1% from General Patient Care, 21% from nonspecific sources. Technologist #2: 34%, 32%, 14%, 6%, and 14%. Technologist #3: 32%, 32%, 16%, <1%, and 20%. The dose draws and accompanying injections account for between one and two thirds of daily exposure. This indicates it is likely a 30% daily dose reduction could be achieved with use of automated injection equipment.